This past Sunday, I was at work on the computer doing busy stuff. I've been doing a lot of that lately.  Natalie, with the day off, opted to bird the park on her own.  Standing 4'11", she came hustling into the building, "floating on air", as the saying goes (making her stand at least 5'3").

She found a Long-eared Owl on the nature trail. She found it herself.  No one showed it to her.  That's important for some birders.

My co-worker and I could not leave the building unattended to go view it. So, I opted to stay behind while Nat played tour-guide.  Within a few minutes, it would be my turn to see the winter visitor.

I never the got the chance.

After they returned, I was going to gear up for the long walk (350 feet).  But first, I excused myself to the restroom. Walking back into the lobby, I could see into the office and noticed a look of distress on Natalie's face.  I could hear her say it....

"I swallowed a candy whole!"

Obviously, she didn't mean it, but she did it. Things happen. Gulp. Down it went. 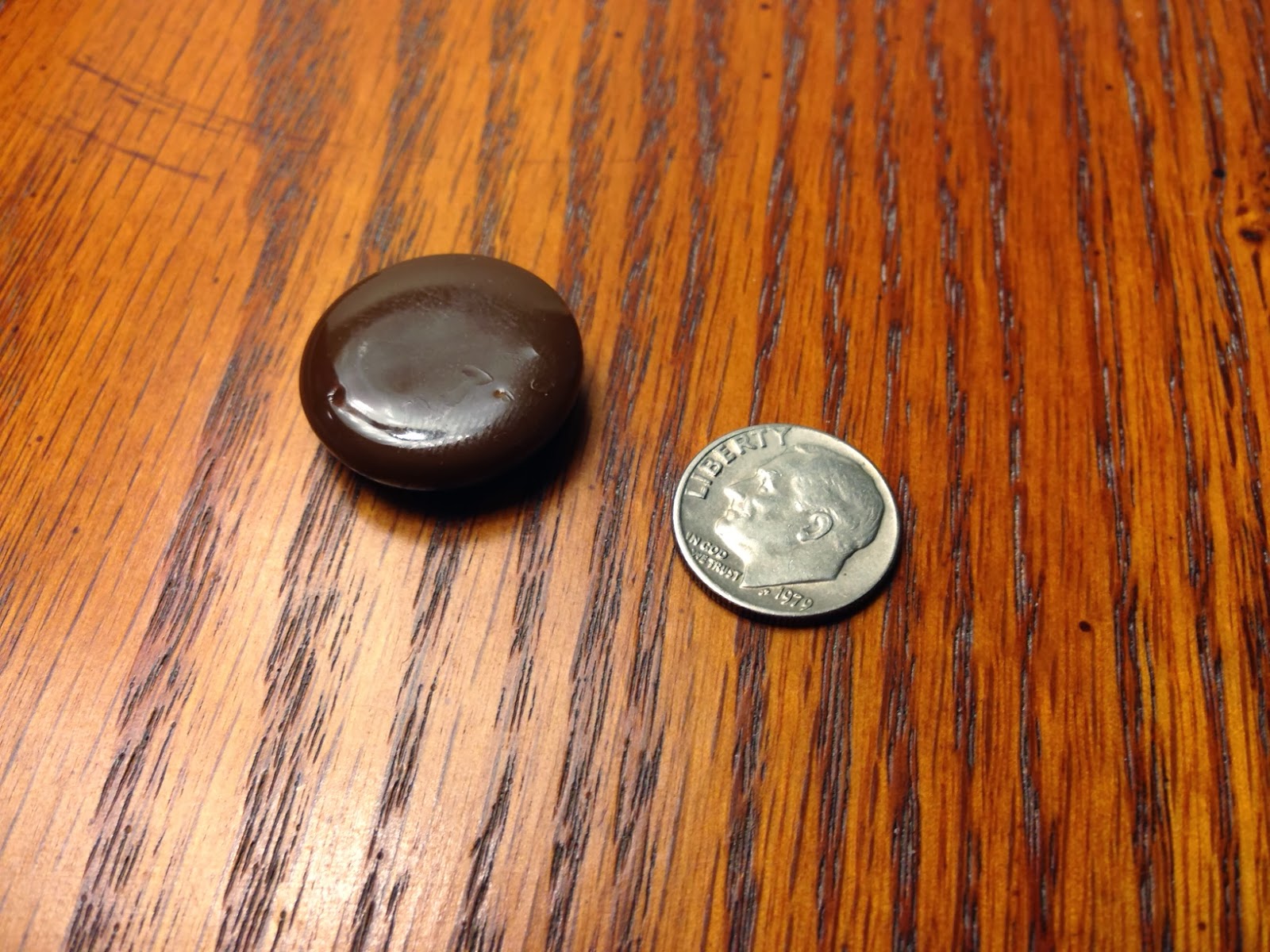 Note the size of the candy at it relates to the dime. What the photo does not show well is that the candy is as thick as a stack of five dimes.....at least.

Within seconds, it was obvious something was wrong.  Very wrong.

The pain and discomfort on her face were obvious.  Multiple attempts to wash the candy into her stomach with drinks of water failed.  Every time she swallowed, the pain would sharpen and get worse only to fade back to a persistent but horribly powerful ache.  This candy was going nowhere.

Now rest assured, I had the situation under control. I, after all, am a doctor.  I have watched all episodes of M*A*S*H and I don't vomit at the sight of blood (though I may vomit at the sight of vomit).  One of my favorite shows is "Untold Stories from the E.R." and my handwriting has sucked since the days I learned to hold a pencil.  Perhaps most importantly, I have been told by multiple people that I, once upon a time, looked like Anthony Edwards from ER

So there you have it - I look like guy who plays a doctor on TV and watch medical shows. I can do this.

I went into the aquarium room for a coat hanger, duct tape, tin snips, and bubble gum.  The plan was to wad up the chewed gum on the hanger, insert it delicately into her nose, down her throat, stick the gum to the candy and pull gently. This works. Ask any kid who has dropped something of value into a sewer.  (The duct tape and tin snips were just for effect. I had no intention of using them.)

If, by the way, you really think this was the plan, you're a complete idiot.  We went to hospital.

While obviously worried, I, at the same time, knew the situation: the candy was firmly lodged in her esophagus.  It was the only thing that made sense.  If it was in her throat above the epiglottis (that cool little flap that keeps food out of your trachea (windpipe to you novices)), she would not have been walking, talking, or....oh yeah, breathing.  If it was in her trachea, she would, again, have been choking.

Yup, Doctor Paul knew the story.  The candy was in her esophagus inferior to her epiglottis but superior to her stomach (that would be "below" and "above" for you medical school drop-outs) and twisted at such an angle where water could get around it. I even told Natalie's mother this before the doctors saw her.

In fact, the doctors agreed with me.  Fortunately, Natalie did not have to endure a esophagogastroduodenoscopy (come on, boys and girls, say it with me!  Eee-soff-uh-goh-gas-tro-due-oh-den-OSK-oh-pee).  Still, they were prepared to try an x-ray to confirm the situation. After screaming at them (telepathically, of course) to just get the God-damned candy out of her throat, she was given a shot and a pill. No really. A shot of a high sugar solution combined with a nitroglycerin pill (administered under the tongue) slightly lowers blood pressure. The side effect is a relaxation of smooth muscles including those that line the esophagus. With less muscular tension to hold it in place, it could drop free and clear.

Within 90 seconds (give or take), the pain was gone. The reaction on her face said it all.   Boom. Gone.  Just like that.  That obnoxious little candy slipped down the esophagus and into her stomach were it rightfully met a fitting death by immersion in fluids only slightly less acidic than battery acid (I'm serious). How cool.

After a few minutes, the doctor paid her another visit. She was fine.  Life was good. Off we went.  Looking back on the paperwork, I am concerned about the diagnosis.... No, she did not.  No, no, no. She did not swallow a grown-up foreign national. It was a candy.

Sadly, despite my reputation, it does not appear that we will be extended a professional courtesy in this matter. We await the bill.

(All kidding aside, this whole situation could have sucked so bad, I don't even want to think about it. Needless to say, she has sworn off all hard candies.  Really. I don't think she can ever bring herself to eat one.  Ever.  Fine by me.  Her mom, dad, and I returned to the park to pick up her car. We poked around briefly - the owl was not to be found.)

Email ThisBlogThis!Share to TwitterShare to FacebookShare to Pinterest
Labels: Blither