The ancient Egyptians did it beginning as far back as the 5th century BC.  The Germans did it (though they complicated it in 1516).  The British did it when they were in charge of India. Its been done all over the globe.  Inside. Outside.  Spring.  Summer. Winter.  Fall.  Kitchens. Backyards.  Tabletops.  Bathtubs.

Natalie and I do it now, too.

Wait a minute. I just read that.

I'm not sure what you were thinking, but I was talking about beer.  No, not drinking it.

Okay, I admit it.  I have been holding out on all of you ("All!"  Hah!  All nine of you!).  We didn't just start doing this. We've been doing it since January.  Courtsey of the coolest gift ever (Thanks Sue!), Nat and I can now stand shoulder-to-shoulder with some of the greatest brewers in the world!

We are not exactly sure what we are doing.  We can follow the recipe (and make great beer in the process), but there is so much to learn in the meantime.

This book from the Brooklyn Beer Shop makes brewing so easy.  Real honest to goodness beer made from scratch like folks have been doing for centuries....10 bottles at a time.

Step one is basically like making oatmeal.  With the appropriate ratio of water to grains (usually one quart to one pound), the warm sludge, officially called mash, needs to be kept within a certain temperature range.  Above 152 degrees or below 144 degrees and the whole process can go bad.  Sugars are the target here.  Too low and the sugars in the grains are not released.  Too high?  The sugars are not usable by our little beasty yeasties (more on that later). The end result in either case is a bottle of sucky "beer". 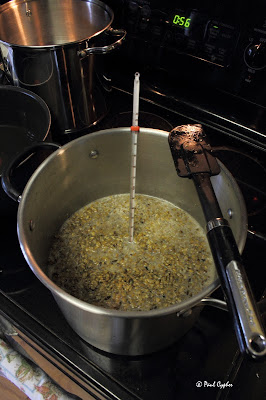 The grains are a key part of any beer.  Often barley, it is sprouted (so the little root comes out like you did in elementary school science) and then roasted. Different roasting times ultimately contribute to body, flavor, color and alcohol content. So when somebody is drinking a Budweiser in a bar (why do they do even do that?) as opposed to a Guiness, the colors of the two beverages are different because of the difference in how the malts were originally roasted.

After an hour (really, that long), the mash is dumped into a strainer.  Water, heated almost to boiling, is poured over the mash.  All fluids are collected.  The whole process, called sparging, is done a second time. 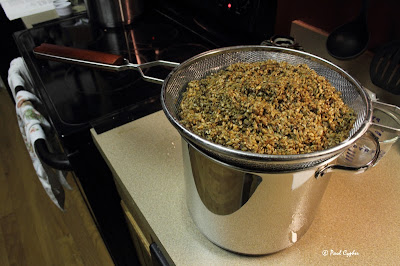 Now at this point, believe it or not, the grains are done. They have completed their mission - they gave up the sugar.  Sadly, they often find themselves in the garbage. Smart people use them for composting gardens and the like.  However, in the hands of those who are domestic divas (like Natalie), they can live again.  Spent grain banana bread, spent grain crusted chicken, cheddar crackers....holy cow, the list can be endless.

So what happened to the water that was collected? Well, its not water anymore.  Its "wort".  That's fancy beer speak for "sugar water that will grow up one day to be beer if you don't screw things up".  But first, it has to be hopped and sterlized.

Brought to a low rolling boil, hops are added as described in the recipe.  Not much more than little flowers that grow on a vine, they contribute aroma, flavor, and the bitterness.

Different varieties (from around the globe) impart different tones when added to the boil. Grapefruit, plums, black pepper, and moss are just four of dozens of tones known to be added by hops.

Some beer styles are hopped like hell. The India Pale Ale is a great example.  When Great Britain ruled India, the Brits in Bombay wanted beer. By the time it got there from jolly old England, the long voyage had killed it.  It was discovered that by adding plenty of extra hops, the beer lasted longer as hops are a natural preservative. The IPA was born.  If you are new to beer and you try an IPA, you will likely die..... (Okay. You won't die.  You'll just pucker up, squint, and look stupid.)

To make things more cool, the same hops added 15 minutes into a 60-minute boil will provide a different degree of character than if it were added 55 minutes in.

Some hops can be added straight from the vine and whole. Many are purchased in pellets that look a lot like rabbit chow. 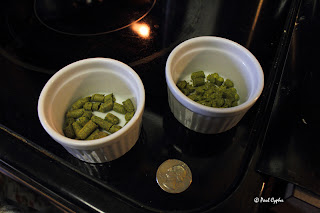 But the boil is not all about adding flavor.  It sterilizes the wort like wiping an alcohol pad on an injection site when you visit the doctor.  The boil is the bullet that kills the cooties. Unwanted ickies will totally wreck all of your efforts when you bust open that bottle a month later. 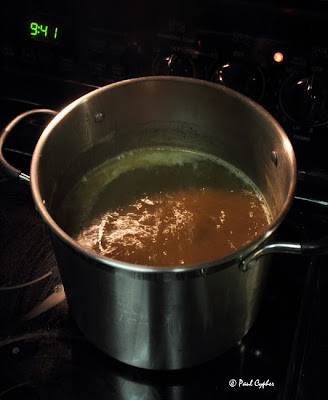 Once the boil is done, temps have to drop quickly.  From 212 degrees to 70 degrees, the mission is to do it fast as possible.  If it takes too long, bad tastes can develop or bacteria can sneak in. Either situation is bad - both can ruin the beer. Some folks have fancy gizmos. For our 1-gallon batches, a simple ice bath does the trick.  20-30 minutes max. 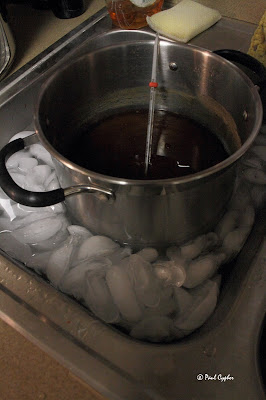 Once the wort (its still not beer yet!) is cooled, into the fermenter it goes.  The giant strainer/funnel combo keeps the crap out (wads of proteins and broken-down hop pellets that were leftovers from the boil).  Yummy pre-beer goes in.

Yeasts are microscopic fungus.  With over 1,500 species cataloged by scientists, brewers pay attention to just a few.  Saccharomyces cerevisiae often gets the nod.

Like all yeasts, Saccharomyces has a peculiar diet - sugar. Once the sugars are munched, the little yeasties burp carbon dioxide gas and pee alcohol.

Is this all making sense?  The wort is now the food for the yeasts.  Over days, carbon dioxide is given off and alcohol is manufactured (that's the part that often gets people in trouble).

It is very interesting to note that early brewers did not know about yeasts.  They knew what to do, but they did not know why it worked. The wort was simply left open to the air. Unknown to them, wild yeasts would drop in and start chowing. As you might imagine, bad yeasts could get established as well as the good ones so quality control by today's standards was rather tough.  It wasn't until the 19th century work of Louis Pasteur that brewers learned what was happening and befriended the little cootie (the yeasts, I mean, not Pasteur.)

For Natalie and I, we simply ripped open a yeast packet and dumped it in. 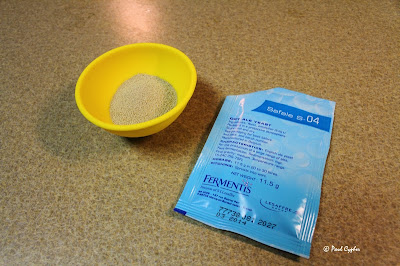 Keep in mind, yeasts also add tones and character to beer (just like the roasted malts and hops).  Each yeast strain adds its own dimension.  Spicy notes, fruit notes, dry finishes and crisp character are all results of the yeast.

Using different malts, hops, and  yeasts, one can easily see how such a wide variety of beers can be accomplished.  Add to this the crazy ingredients that one can add (chocolate, apples, honey, raspberry, etc) and the road of beer is endless and winding.

(It is here by the way, that I can clear up that 1516 reference from my opening paragraph.  In the year 1516, Germany passed what is now the German Purity Law. In short, beer brewed in Germany can only be made with grains, yeast, hops and water. Nothing more.  So, if Natalie and I were traditionalists, the beer we already bottled a few days back, a blackberry ale, would be in violation of the law as we added blackberries during the ice bath.)

Heaving the 1-ton 1 gallon carboy over my head, a whole lotta shakin' is needed. Stir that wort.  Liven up the yeasts.

One important detail that CAN'T be over looked is the carbon dioxide.  A long story short, Natalie and I basically created a bomb for the kitchen counter.  Once the yeasts are really eating (and therefore burping and peeing), the gas pressure is tremendous.  A ruptured carboy is possible.

A blow-off valve is rigged.  Its easy.  A tube is run from the carboy top to a bowl of sanitizing solution (used to clean everything. Remember, bad bugs can wreck a batch).  Gas can leave the carboy but ickies can't enter the tube because the solution blocks them. Its a one-way door.  Gas out. Nothing in.  (Sounds like the brain of a Republican...)

After a day, the yeasts are really burpin'....

So, there is sits.  The burping has died off, and the tube has been replaced with a a simple airlock (a small version of the blowoff tube).  As I type this, it has been a few days since the brewing.  Are we done?  No. It sits for a while.  (The maroon sleeve sits over the carboy like a...,er, condom.  Direct sunlight is bad.) 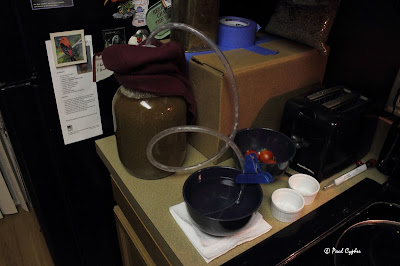 Then we bottle.  More on that in about 10 days.

(The beer we are brewing, by the way, is called Prohibition Ale.  With three types of grains and two hop varieties, it will clock in at 5.5% alcohol.)
Posted by Paul at 9:39 PM

Blackberries? You Guys and your Flavours! Wouldn't mind trying the other stuff though!

Flavors (that's how we spell here it, buddy ;) ) can really add a new dimension if it is done right. The 1516 Purity Law can be awkward. It should be noted that the Law was amended such that German brewers can do what they want so long as the beer is exported.

Today I brew a Rye IPA. (We secured a second fermenter just yesterday.) When the blackberry stuff comes out of the first carboy, we'll be doing a pumpkin dubbel. *Real* pumpkin chunks will be added to the mash and then again during the boil. A cinnamon stick and some cloves should be just right.