We Have Met The Beer, And They Are Ours

With the Bicentennial of the War of 1812 underway, it seemed appropriate for Natalie and I to take a day (Tuesday) and visit the site of one of the war's most important engagements.  Put-In-Bay, Ohio was the destination.  Oh yeah. There was beer, too....

The War of 1812 (which started in 1812, by the way...) was not going well for the United States in and around the Michigan Territory.  Hull surrendered Detroit without a single bullet flying.  Fort Mackinac fell.  The Massacre at the Battle of the River Raisin had occurred.   By mid-1813, things were looking downright dismal.

Things, however, were looking much better by the end of September 10th.....

On that morning, Commodore Oliver Hazard Perry and his fleet of nine ships left the safe waters of Put-In-Bay.  Just over the horizon, Captain Barclay's British Fleet was ready to pounce.  Six ships were under his command.

The ships were not the same.  Perry's ships were mostly armed with carronades.  Think of them as shotguns - lethal at short-range, but not worth a poop at long range. The British, on the other hand, had what amounted to rifles - accurate at long-range but less damaging in close fisticuffs.

Like the war up until that point, the engagement soon to become known as the Battle Of Lake Erie did not start well for the Americans.  With the wind in their faces, Perry could not close the distance and hammer the Brits with the carronades. The distance between ships was great enough to clearly give the away the advantage to Barclay.

Wouldn't a wind shift here have been grand?  If the winds shifted, Perry could close the distance and bring his carronades to the fight.

It happened. Another one of those freakish weather events that changed history.

With the wind to his back, Perry's fleet closed in.

With Perry's flagship, Lawrence, getting shot to pieces while engaging both the Detroit and Queen Charlotte, the Niagara, under Captain Jesse Elliott, stayed back.  Historians, to this day, debate what the hell he was thinking.  With only the Lawrence engaged (and some smaller ships), the British were able to concentrate their fire on Perry and basically destroy the ship.

In a display of testicular fortitude that will live on forever, Perry did not surrender.  He could have; perhaps no one would have blamed him.  But he didn't.  With a few uninjured crewmen (four out of five were dead or maimed), he rowed to the Niagara.  Accounts suggest the conversation with Elliot was brief.  He (Elliot) left the Niagara for one of the smaller ships while Perry ordered his new flagship to engage. 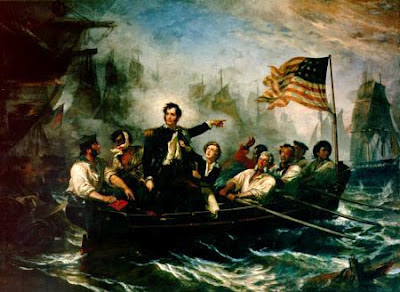 Moments thereafter, the Niagara pulled off one of the greatest combat maneuvers in maritime warfare.

Larger ships of the time were more or less limited to firing broadsides.  (Its a long story.)  If one could maneuver a ship in front of the opponents line of travel and move from right to left or left to right, the "T" is crossed and you can let 'em have it with a broadside. They can't fire back.  If both ships attempt to cross the T at the same time, they basically end up pulling up next to each other, broadside to broadside, and invite death.  In 19th century naval combat , if you don't know your ABC's and mind your P's and Q's, when the bad guy crosses the T, you're F'ed.
The Niagara, now shooting double broadsides down both ends of the British line, pummeled the ships into submission.  With the Detroit and Queen Charlotte soon locked after a collision, the British threat was functionally zero.  They surrendered.

That afternoon, Perry penciled on to an old envelope the now famous words:

"We have met the enemy and they are ours.  Two ships, two brigs, one schooner and one sloop."

The American victory in the Battle of Lake Erie changed the course of world history.  I won't tell what would of happened if Perry lost, because we will never know.  But, we do know what did happen after his victory.  By taking command of the lake, American forces were free to move as they pleased.  Within weeks, British-held Fort Malden fell without a shot being fired. Tecumseh (the architect of the Indian Confederacy) was killed shortly thereafter ending any organized Native American threat during the war.  The war was over in 1815.  Had Perry not transferred his flag and continued to fight, there is simply no telling how the world would be today.  (As long as there was still beer and Republican stayed out of office, I'm sure it can't be all bad.) 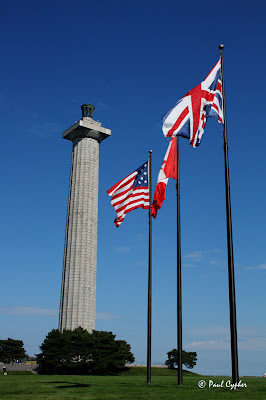 Today, Perry's Victory and International Peace Memorial serves two purposes.  At 352 feet tall, it commemorates Perry's significant levels of testosterone on that fateful September day in 1812.   It also celebrates the long-running peace between the United States, Canada, and Great Britain.  For that reason, the flagpoles of each nation are the same height.  Highlighting this peace between nations, six officers (three British and three Americans) killed in the Battle of Lake Erie are laid to rest side by side underneath the tower. 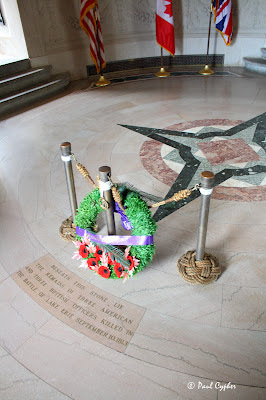 After soaking in the views from the top of the monument (where a woman next to us professed she was looking at a Black Widow - it was brown...), we took a walk across town to enjoy lunch at Put-In-Bay's only brewery.  Housed in the building that at one time was the fire station, it is, amazingly enough, called the Put-In-Bay Brewing Company. 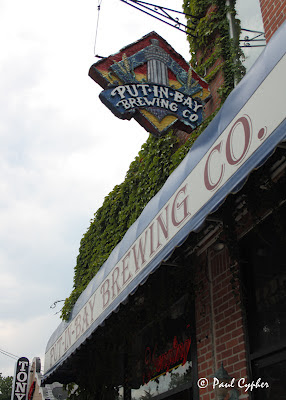 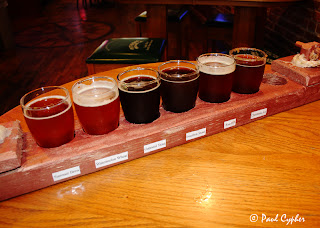 "Bad" was the South Bass Oatmeal Stout.  Okay, "bad" is too harsh, but it wasn't good in my opinion.  I'm struggling to describe how, but I just didn't dig it.  That said, by default, the Bourbon Stout was also poor as the Oatmeal Stout was the base - they simply added bourbon. If the base beer is not as it's best, the modified version is limited.  (It is not unlike the Battle Of Lake Erie. Many of the sailors were not sailors at all.  If the best ships don't have the best crew, potential is limited.)  A "2" and "3" respectively.

The Watermelon Wheat was a twist on an old theme.  It looked like a wheat but smelled like a watermelon (as you would expect).  It tasted like one, too.  This beer would have been superb on a hot day with a fruit salad.  Seriously.  Well done for a fru-fru beer.  Solid "4".

The best beer of the Day was the Rye IPA.  It was pretty damned good across the board.  Amber/copper to the eye, and well hopped with underlying sweetness on the finish, this was very well done.  Solid "4".

Goof ball beer of the day goes to the Christmas In July Ale.  Traditional holiday spices (including brown sugar on the rim like salt on a margarita) somewhat over powered the hop/malt balance.  I am glad I had the sample size - 3-4 ounces.  I think a full pint might have been a bit too much.  Especially in mid-August.    A "3"

That afternoon, I sent an email to friends showing the beer menu. It was just an attempt to say "Hi - we're having fun!"  With all of the world reading my nonsense, I now send this message out for the greater good:

"We have met the beer and they are ours.  Two wheats, two stouts, one ale and one IPA."

ancostYou guys just wont surrender will you? Washington didnt and now Perry.Frightfully caddish of you.You would be blackballed at the gentlemans club thats for sure...By the way,have you tried The Great Lakes Brewerys Commodore Perry?VG!

As a matter of fact, yes, I have had the Commodore Perry IPA. July 7, 2009 on site at the Great Lakes Brewing Company. A very well done beer, in my opinion. A solid "4".

Yes, as a general rule, "surrender" and "America" are rarely used in the same sentence. "Surrender" and "France"? Now that's a different story!