Legends surrounding the moon abound.  Different cultures from around the world have interpreted Earth's one and only natural satellite in many ways.  Be it the shape, location or time of year, everyone has (or has had) their own take on what it all means.
One interpretation is from the Bible.  While I don't believe a word of it, I find it interesting to note that a red moon is basically a sign of the end.  So it says in Revelations.  (I'll take that from the Internet. I never read the book.)

So, while ancient cultures thought different things of the red sheen, we now know it has to do with the way light gets bent as it bounces off the moon and through the atmosphere to our eyes.  That is why the moon shifts to more white and gray tones as it gets higher in the sky - there is less atmosphere to bend the light. 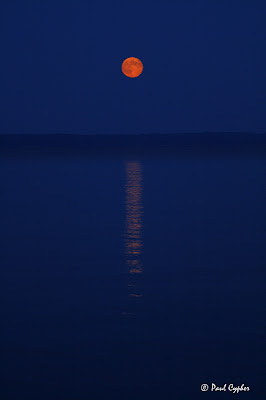 I snapped it along the shores of Grand Traverse Bay.  Standing on a sandy beach about 9pm (or so), I knew the moon would rise full.  So with my camera rig and tripod ready, I had some fun.  I was up there with Natalie and her dad's family (all 1.8 million of them!).  They were having a reunion and I was invited. We all marveled at how red the moon was, how tiny we all felt, and what it all might mean.

Little did I know the end was near. About 26 hours later.  In fact, it was my turn to end. Others were having their turn, too!

In what will certainly live on forever in family lore, the 2012 Family Reunion in Northport might also be known as "Plague Week" or "The Week The Blood Red Moon Killed Us All."

While epidemiologists may study this virally-seismic event for centuries, I can summarize it here.  Remember, hindsight, as they say, is 20/20.

Someone was sick first.  (Yes, folks, I have a college degree.  I'm smart.)    While ideas exist as to who this "someone" was, we can only speculate as we have no blood samples or deceased bodies.  For the sake of discussion, Patient Zero shall be called "Natalie's Dad".  Violently ill on the drive up to Northport, it was presumed a tainted burger from Wendy's did "Natalie's Dad" a disservice.  The symptoms hit suddenly and violently which is completely consistent, of course,  with food poisoning.

"Natalie's Dad", was under the weather for but a short while.  A day or so.  (Again, food poisoning?))  His travel partner (named henceforth as "Natalie") was likely exposed to various cooties in the confined quarters of "Natalie's Dad"'s jeep during the northbound drive.  Some viruses, once established in the human body, can spread from one individual to another individual via aerosolized toxic snot.  Before long, he presumably did what people do at family reunions - shake hands.   She likely did the hugging with the close proximity breathing not realizing she was infected and contagious without  a manifestation of symptoms.  The die was cast and the perfect storm....um, stormed.  Two cootie-filled bodies were now let loose on a family reunion.

Like soldiers on a Civil War battlefield, reunion attendees dropped.  By mid-week, casualties were in the millions a few a day but never any more than three at a time.   All experienced the same food poisoning-like symptoms and quick recovery (24-36 hours) , but there was not a common source of food to explain everyone's misery.  In addition, the timeline rules out tainted grub. A few illnesses spread out over days (instead of a massive casualty rate in *a* day) suggests something more diabolical.

I arrived on the scene Wednesday night.  Natalie was mid-way through her temporary death.  Others (who were sleeping in separate cabins but had spent considerable time in Cabin Zero with Patient Zero) were in various stages of misery.  Canoeing was switched from Thursday to Friday to allow those infected time to recover.

The photo you presumably already viewed was taken Thursday night after a wonderful bounty of venison, wild caught salmon (from earlier in the week), salads, and just good food all around. Little did I know the moon's blood red color was a omen of my future....

After a successful canoe trip on the Platte River (defined as "not tipping") it was off to dinner for Natalie, her dad and I.  (This is not to be confused with "Natalie" and "Natalie's Dad". Remember this is going to be in a forth-coming CDC report and names have been changed to protect the damned. Not really, but anyways....)  After a wonderful dinner at North Peak Brewing Company (a cousin to the Grizzly Peak Brewing Company), it was time to part ways and head home.  I had to work Saturday.

The GPS took me on a route I had never been on before. Instead of heading east to Grayling and then south along I-75, I headed south out of Traverse City and then over on secondary roads to Midland and Bay City. All the while, I was cursing myself for not drinking more fluids. That pesky headache was getting worse.  Too much sun followed by dehydration, for sure.

By Flint, I was pretty sure the dehydration diagnosis was flat wrong.  While the sun was getting lower and the air slightly cooler, I could feel myself getting warmer despite attempts to use the air conditioning.  Seeing the writing on the wall, it was not a question of "if..." but "where,when, and how messy..."

It really is amazing how the human brain functions.  There are so many little nuances that we just don't understand.  We have learned so much in the last 100 years but we know so little.  At the same time, as an adult (creeping in on the 12th anniversary of my 30th birthday), it is amazing how you learn to analyze a situation in micro-seconds to enact a positive outcome based on screaming instincts. Those same instincts would be worthless at age 10, as one does not understand what a body is trying to say.

Take, for example, vomiting.   When hurtling down the expressway (as opposed to hurling on the expressway...wait for it...), it is amazing how the human brain can send messages like this in nanoseconds: "Paul, you have exactly 8.64 seconds to competently decelerate from  79mph to 0mph , open the door, safely exit to the shoulder and projectile vomit.  Your time begins....now."

I even managed to check my blindspot before switching lanes.

If you have ever been driving on the expressways at night and seen some poor bastard on the side of the road blowing chunks, pity that man.  It is a miserable experience.  Trust me.  (Okay, I take part of that back.  Barfing on the roadside in the dark ain't so bad.  You don't have to clean up a thing and you don't actually see a thing, either.  Just like they say on a pelagic trip - shoot for distance!)

Sometimes the best thing to do to make yourself feel better is to throw up.  My body took care of it (no finger-tickling the 'ole uvula here).  While I still felt awful, I felt much better.  Paradoxical.  Just iike moons - so many good stories and a few bad ones, too.

Needless to say, working Saturday wasn't going to happen.  A quick text message to my new boss made the message clear. If I attend work and do programs, I will be the 21st Century equivalent of Typhoid Mary.   Not gonna happen.

After 2 hours of sleep, I was in a state of misery and quasi-consciousness - ill enough to not work , but not ill enough to sleep it off.  With cranberry juice my only friend, I spent hours puzzling over why we have to be so infatuated with Michael Phelps when a much more successful Olympic athlete exists.

By Sunday morning, I was feeling so much better.  My case of rot paralleled the cases of the others who had been infected. Brief misery followed by quick recovery. Amazing how nature works like that.

Some statistical analysis, if I may.  Of the 36 family members in attendance over seven days, 25% (one in four!!!!) contracted what will now by known as the Northport Norovirus.  Of the 25%, six where staying in one cabin or had spent significant time in said cabin.  One patient (who shall remain nameless; she is minor) was sick in the final days of the reunion. but was in Cabin One where two patients were spending some time after spending significant time in Cabin Zero (originally occupied by Patient Zero).    Epidemiologically speaking, she may yet have passed the disease onto her family.  It is completely possible, as of this writing, that other members of the family are dealing with the outbreak.  More study needs to be done. It is also completely possible, based on the tenets of science, that this entire working hypothesis will be scratched if new information comes to light.

Suffice to say, ancient cultures (and modern cultures that won't dispense with ancient nonsense) might have something to say about spreading plagues and blood, red moons.

Me?
No.  It is all a coincidence.  I'm sure of it.  In the meantime, I'm very grateful no one was in my blindspot on that stretch of southbound US-23.  Wearing one's dinner can't be fun......

Beautiful moonrise photo, striking contrast between the orange and blue. Not such a pretty story though. I once left work early suffering from kidney stones which made me nauseous. I made it all the way to the Sibley Rd. exit ramp before I had to pull over. I must have looked like such a loser wretching on the shoulder at 6am.

After my experience, I will never think anything in a negative sense about roadside vomiters. Your story plays on that idea even more. Lots of things can happen that would make one sick behind the wheel.

Now, if one drank to much and then pulled over to wretch, to hell with them.

As for the photo, it is actually a combo of two images. Exposing for the sky burned out the moon while exposing for the moon darkened the landscape. The land was slightly shifted by lightening the shadows - it provided that neat blue. I like to the photo, too. Thanks for the kudos!