With sun the rising and already heating things up to the melting point of lead, we took off from Tombstone for Patagonia Lake StatePark.  A target bird (longshot as it was,as there were no recent reports) was Black-capped Gnatcatcher.  20 years ago, this bird was hot stuff in the United States. They are breeding here now, but are still hard to track down.

Using internet maps and some common sense, we had wonderful birding in the wash along the east end of the property (when we were not dodging massive cowpies).  The Lucy’sWarbler was a target bird for me later on but I was not expecting one here! Life bird #659!!!  Rufous-winged Sparrow.  Vermillion Flycatcher.  The Yellow-breasted Chat was a new one for Nat, believe it or not. She’ll get one in Michigan before long, I’m sure.  She won’t see a Hepatic Tanager anytime soon.

Sadly, time was spent chasing a Bell’s Vireo through the brush. To our Midwestern ears, the call of the vireo sounded somewhat like the call of the Gnatcatcher. Before long, with heat building and cow trails looking less familiar, we turned back. No Black-caps for us!

A brief stop at the famous Patagonia Rest Stop was not hugely productive.  The Rufous-crowned Sparrow was new for Nat. Not much else.

A  treat of the day was as the end of a street on the outskirts of the tiny hamlet of Patagonia.  For years, birders from all across North America (and beyond) have spent time in the backyard of the Paton House. They graciously opened up their property to visiting birders. Simply put, this yard is the single most reliable place in North America for Violet-crowned Hummingbird.  If you wait, it will come.  It’s that simple.  You don’t have to wait long either.

Before long, we were gawking at the Violet-crowned. That is him on the right. 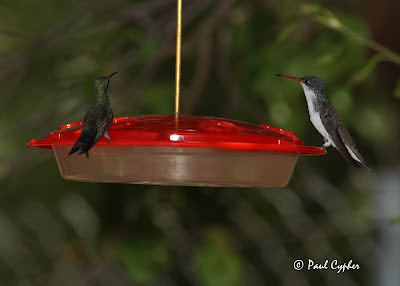 Costa’s Hummingbirds were putting in appearances as well. They become more common later in the summer.  Black-chinned and Broad-billed Hummers were common place too.  The Hooded Oriole was an eye-catcher as well.

It is worth nothing that the Paton House is free of charge, but they ask for donations to help cover the cost of the feeder station.  Sadly, both Wally and Marion have passed away.  Various groups are in discussion to see who might buy it. In the meantime, Natalie and I did out share. I used it as an opportunity to spend my "Where's George?" dollar.  Yes, I have been holding on to it for months so I could drag it across the country.  Lest you think I'm cheap, know that a 10-dollar bill was behind the George. 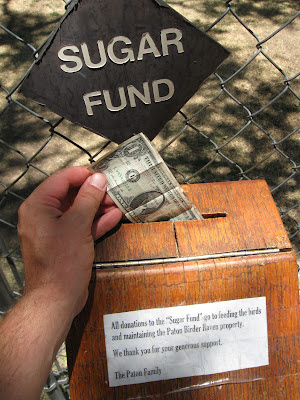 With Natalie just completing a college level astronomy class towards her Master’s Degree, it was time for a drive.  Just a few hours to the west sits one of the neatest areas of North America.

Organ Pipe Cactus National Monument is a Biosphere Reserve highlighting desert ecology and accommodates what is basically the only region in the United States were one can find the Organ Pipe Cactus.  With light pollution at a minimum and the often clear and dry skies of the southwest to boot, star gazing here is said to be some of the best in the country.

After discovering the border “town “of Lukeville (population: 35) was a duty free shop, a diner, and a gas station (NO LODGING despite literature suggesting otherwise), we were concerned about camping.  No one could be found and suggestions had been made about not camping. Eventually, after touring the campground and seeing that a college class studying desert ecology had been camped there for days, we set up not too far away.

The evening drive turned up a family unit of Harris’sHawks.  A desert specialist, they are known to tag-team as they hunt rabbits and the like. Other birds of prey won’t do that.   This was one of the birds I was hoping to secure for Natalie. Having them land a stone’s throw from the car really helps! 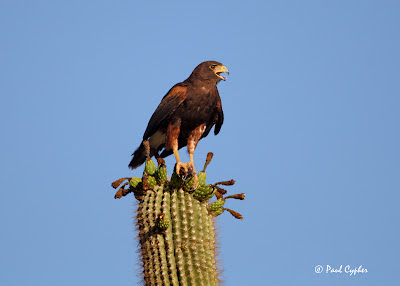 The sunset was pleasant. 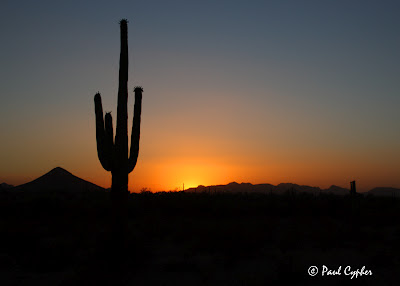 After sunset, we snagged a glimpse of Mercury before it slipped behind the mountains.  Before long, the place  just lit up.  Scorpius, to the south, was shining like I had never seen it before.  Saturn.  The Milky Way. Mars. Snickers.  Satellites were zipping by. The Mirror Pond Pale Ale from the Deschutes Brewery was perfect for the evening.  Good company. Good sights.  Good beer.  What more could you ask for?  The Common Poorwill calling in the distance was icing on the cake.

Sadly, my star photography was a bust.  I’ll bore you with it some other time.

We didn’t even set up the tent. Setting up camp takes time.  Tearing it down does the same.  Knowing temps in the morning skyrocket after sunrise, we opted to maximize the star gazing in the night and minimize the grief in the AM. We slept in the car. 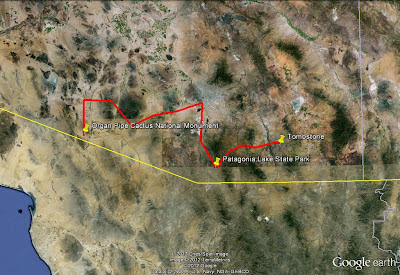