Dictionary.com defines "peregrination" as a course of travel or journey.  While the definition is not very detailed, I think it is fair to say that many would conjure up the idea that the journey might be a long one.
Sure, one could argue that a half-mile walk to the party store would be, by definition, a peregrination, but it just doesn't sound right. Compare that with a walk to a party store 500 miles away. That might be a peregrination we could all sink out teeth in to, right?
So, when this bird shot past the hawk watch a few days ago, I couldn't help but to think where it was going. 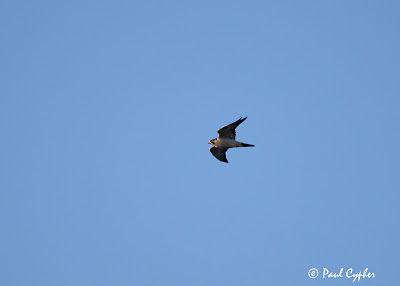 Peregrine Falcons, true to their name, "wander". I don't mean wander in the sense of lost; I mean wander in the sense of covering great distances.   Using fancy-schmancy satellite stuff, we now know that populations of this species that breed along arctic cliffs will migrate to South America.  that's thousands of miles - one way! Check out this image.  How is that for cool?
It moved pretty effortlessly, as you might expect. Speed? I can't tell you.  The books say a cruising speed could be around 40 mph or so. I got the impression this bird was moving a bit slower than that, but I can't be sure.  They can certainly fly faster or slower as needed.  It only makes sense - wanderers can choose a destination so why not choose a speed?
What I can say, with certainty, is this: the bird was not flying at top speed.  When these things dive, they almost re-define speed.  Take a moment and check out this video and you'll see what I mean.
So, while we don't know where this bird started or where it will end up, I'm not worried. It'll get there....and at the speed of its choosing.

Maybe JRR Tolkien's quote would apply here:  "All those that wander are not lost."