Ahhh, milestones!
This past Thursday was a biggie in my relatively insignificant beer world.  Number 1,000!  One-zero-zero-zero.  "M" if your a Roman.  "1111101000" if you speak with computers.
Fort  Street Brewery, home of the nuclear-powered brewmaster, Doug, was the site of this very-not-historic, but somewhat signifcant event.  It was also a fine opportunity to see friends I had not seen in a while.  Beer and good company.  Can it get better?
For the record, this is the only photograph to date on this blog showing me.  For a few years now, I have been posting here and NEVER have I shown my ugly mug.  But, for such an occasion, I decided to violate my own rule and have a picture of me actually doing something. 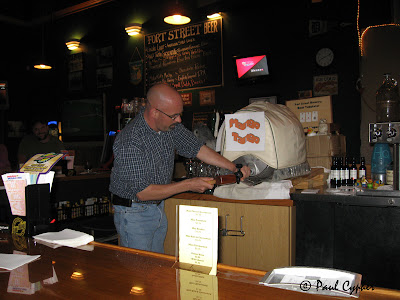 Mango Tango was nothing more than Doug's Piston Pale Ale in a cask stuffed with about 2 pounds of mango.  I think the key ingredient was the Ale.  I have to admit, the mango tones were very subdued.  I think a bit more mango could have been added, but what was present did not distract from the beer at all.  A solid 3 out of 5 on my scale.
An event like this give me a chance to go back over my spreadsheet and crunch some numbers! In no particular order....
* My first official critiqued beer was November 19th, 2003.  Don't read too much into that. There is a loooooong story here. I was actually enjoying beer before that.  Buy me a beer and I'll tell you about it.
* Of the 1,000 beers to date, I have had samples from 272 different brewing operations (be they breweries, brewpubs, or home brewers (just a few)) including 57 IPAs, 132 Lagers, 88 Pale Ales, 51 Stouts, 45 Porters, 30 Pilsners, 286 "Ales", and 47 Brown Ales. The rest is simply of mixture of the sort of stuff your average Bud Lite swiller just doesn't get.

* I can promise you the list is not accurate. It is higher. Over 9 years of work, I can be certain, somewhere in the mix of it all, I have enjoyed beers that were not added to the spreadsheet.   Notes get lost.  Files get botched.  1,000 is the official number, but certainly a tad low. (You might think of it as home runs in baseball - you crank 'em over the fence all day long if you want, but if you don't do it in a game, it doesn't count)


* I have had beers from 30 of the 50 states. Those states are shown below in red.  (Sorry, no mappage for foreign countries.) 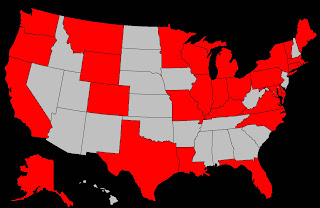 you are a star and there is no denying it! Here is something to ponder.How many of those 1000 beers would you drink again?

I can't give you a set number, but I would say that I would easily have most of them again. Only 25% or so have been logged as a "1" or a "2" out of "5". With a "3" as an average, I could not find anything horribly wrong with them, so most were good enough for me to have a second time!