So, yesterday I took a page out of my buddy's book.
Josh, a buddy of mine who is a photographer and birder, had told me in the past about watching birds as it relates to photography.   Watch 'em. See what they do. Where do they land? Where they like to fly?  Do they have patterns?
Yesterday, after a casual start to my morning (sleeping in followed by Feta and lemon pancakes with a fruit salad topping), I opted to head up to Elizabeth Park in Trenton.

A busy Sunday morning, a ton of people were fishing, walking, running, and dealing with dog doo.  This Wayne County park is basically a giant loop. In my younger days, I would head up here with buddies as it was quite the place for muscle cars and the like. Good times, indeed. (Any suggestion that I was sporting a mullet at the time are exaggerated.  So says me...)
What was I doing here now?  I set myself up along the breakwall at the marina with hopes. No fishing for me. With my rig in my hand, a hat on my head, and no sunscreen on my sandled feet (a decision I would later regret), I stood and waited. 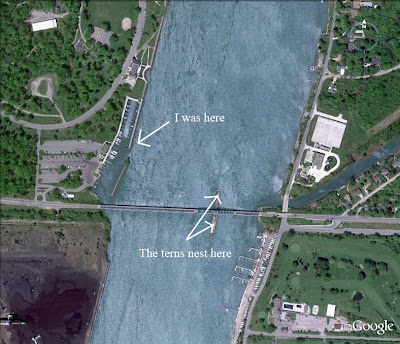 The Common Tern, sadly, is not so common anymore.   Once thought have about 6,000 nests in Michigan, the bird is now a "Threatened Species" according to the Michigan Department of Natural Resources.  It's the same ole stuff - habitat loss. That, in turn, contributes to other problems including predation by gulls (who benefit from the changing landscape).
For whatever reason, beginning just a few years ago, the terns decided that they like the concrete pier under the Grosse Ile "Free Bridge".   (For the record, they also nest under the Grosse Ile Pay Bridge up the river....free of charge.)  Under the watchful eye of the Detroit River International Wildlife Refuge, this pier has been modified to better suit the terns. Better substrates, weed barriers, criss-crossing wires to minimize the impact of flying predators, and secret Federal laser beams have been placed to give these desperate birds an boost.  While it is not a flourishing colony, it exists. Barely. But barely is better than not at all.
From a photography standpoint, knowing the colony is only 250 yards from the Park Marina, I can wait them out and let them come tootin' by. They do.
I took 65 pictures in almost 2 hours.  That does not sound like much, I know. But remember , I had to let them come to me.  Once I realized my lighting absolutely sucked for the most part (it was late morning with harsh angles and shadows), I had to wait for a bird to do something to accommodate me. One finally did. 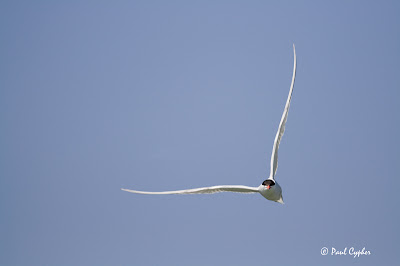 Almost 2 hours with dozens of pictures and only ONE that is slightly better than "okay".
I find this picture somewhat deceiving.  While the bird appears large in this photo, they are not large all.  Their body is only a few inches longer than a Robin but with a wingspan that is twice as long.  With no effort at all, you could stuff one in a Pringles can.
I need to get back there in the evening in the coming days.  The light will be to my back and I might be able to come away with something more.
Posted by Paul at 9:22 PM

Nice!!! I think we'd both agree Photographing birds and Watching birds are two totally different things. Nice to hear you got some Photographing in. I love that style of nature photography, sitting and waiting! -Josh