War history and movies. They go so well together with the combined efforts of good acting, directing and writing.  Saving Private Ryan.  Glory.  Gettysburg.   Platoon.  Black Hawk Down.  All classics. Forget Pearl Harbor.  It was a disaster and should be stricken from all archives.

Anyhow.....
I have a new movie, but I have not yet written it.  Based on the book Libby Prison Breakout: The Daring Escape from the Notorious Civil War Prison" by Joseph Wheelan, it is sure to be a winner.    The book, a gift from my parents for Christmas, was finally finished last night.  Awesome.
In the opening days of the Civil War, the Confederacy hobbled together a few prisoner of war camps.  Taking over a large structure on Richmond, Virginia's waterfront, the name  "Libby" stuck, as no one thought to take down the sign placed by Luther and his son, George. Originally a ship's chanderly and grocery warehouse, it soon became a Confederate POW camp for Union officers.
With only eight rooms for prisoners, each barely over 100 feet by 40 feet, the three-story structure (with a walkout basement on the river-side, making it a functional cellar) was simply nasty.  Windows? Sort of.  Holes in outside walls with bars would better describe it.  If it snowed or rained? You got cold or wet.  Hot Virginia summers? Sweltering heat.  Brutal stuff really. 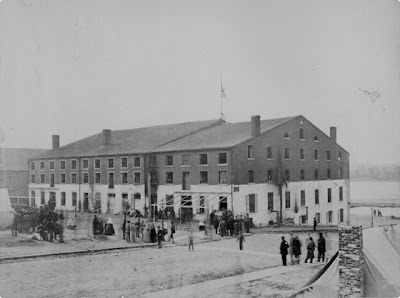 At first, the turn-over of prisoners was reasonable as a result of the Prisoner Cartel. Basically, the North and South traded prisoners.  Really. They did.  By the mid-point of the war, the Union came to a simple conclusion - "This is hopelessly stupid.  What dumbass came up with this idea?"  Every time an exchange took place, the Rebs would put the soldiers back at the front so the Union could fight them again.
The solution? Stop the trading. Only chaplains and surgeons were paroled, and even then, sparingly.
Yeah, cool, if you're the Union trooper on the front.  You won't have to fight the same soldiers again.  Not cool at all if you are the prisoner.  You're stuck until the war ends.  There is also a bigger problem. The army of Johnny Rebs could barely feed itself during the later months of the war.  So why in the world would they feed the POW's?  Basically, they didn't.
Before long, lack of sanitation, poor diet, and host of other problems led to massive die-offs.  Overcrowding was a huuuuuge problem.  The Confederates stuffed over 1,200 officers into a building that became the second most awful camp in the Confederacy.  The first? Andersonville.

Of course, in many prisoner of war camps throughout history, there is a "spectrum" of prisoners.   Some hang on until released at the war's end. There are those that try to hang on, but can't. Ill or suicidal, they die.  Then there are those who want to escape. And do.

The guy on the left with facial hair that so defined the period?  Major A.G. Hamilton.  Like many officers of the war, he had a civilian job before hostilities started. He was home builder in Kentucky.  Pretty cool trade, huh?  What a treat to have a guy like this in your camp. Every wall. Every post. Every brick. That chimney. That fireplace. That floor joist. He knew why they were there.  While he did not build Libby, he knew it. 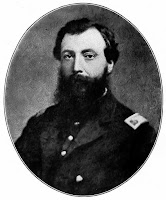 This other fellow?  Colonel Thomas Rose.  Put him in clothes from 2010 and he would fit right in. But something in him put him in a class by himself.  Determination.  Come Hell or high water, he was going to get out of Libby if it was the last thing he did. Captured at Chickamauga, he was a teacher in his civilian life.  Some historians suggest he may have spent some time in the coal mines of Pennsylvania....digging.
After constantly bumping into each other looking for ways out of the building, Rose and Hamilton  teamed up and settled on the cellar as the starting point.  Basically, the plan was - get tools, dig a tunnel from the cellar, do it quietly at night,and don't get caught.  But, how did they get to the cellar?  Hamilton, with his knowledge of the building and building trades, figured out he could cut the mortar with a penknife (it had been smuggled into the prison), remove the bricks, and get into the wall. From there, he moved down within the wall,and then out into the cellar. During the daylight hours, the stove in the kitchen was moved back into place to hide their efforts.

Teams of people worked in shifts for weeks. Some dug. Some moved the dirt and hid it in various nooks and crannies.  Some simply fanned air into the suffocatingly tight tunnel. After three tunnels failed for various reasons, the fourth was a success.  After tunneling 53 feet underground to the opposite side of Canal Street, they popped up in a tobacco shed.

The night of the breakout, the team members selected friends (only a few dozen people were actually in on the tunnel construction and had first dibs on the escape).  With a "guard" controlling the flow of escapees at the stove, they left. In the hole, down the rope ladder, out the hole, across the pitch black cellar, on their bellies for 53 feet in a 26" tunnel , and over to the shed.    Out the door they went and off to freedom.  Some even saluted Confederate guards as they went.

After the first teams were gone, the kitchen filled with eager, hopeful, officers.  More left. And then more.  And more.

Roll call the following morning was a joke.  Of the 1,200 or so people in the building the night before,less than 1,100 remained. In the span of one night, 109 officers slipped off into the February-cold Richmond night.  Over the following days, 2 died (drown while trying to ford a river), while half were re-captured. The remaining half, in horribly cold weather, malnourished, underdressed and pursued by soldiers and dogs, managed to cross Union lines.  Rose, the determined digger, was captured while in sight of a Union patrol.

Of course, Hollywood blockbusters sometimes need a heroine,  right?  Enter Elizabeth Van Lew.  A socialite of Richmond, she despised slavery and made it her goal to help the Union in any way she could. Smuggling messages out of Richmond and even into Libby Prison, she was a wealth of information and a world class spy, right down to secret ciphers and invisible inks. With a network of spies she created (including a Confederate clerk who worked at Libby), she assisted the soldiers with their escapes.


I couldn't help to think about my movie as I was reading this book.  Seriously. I'm not talking about a "made for TV" movie.  I'm talking about the real, big-screen, deal.  A big name director with some high-clout actors could make this a real solid piece.  Cameron and Spielberg have both shown they can do period pieces with extraordinary attention to detail.   (Okay, we'll look past Cameron's "Piranha Part 2: The Spawning".) Jeff Daniels ,as Hamilton, would  be great. Christian Bale could do it, too, but an anger management counselor would have to be on the set so he doesn't do this again.  Kathy Bates could be Elizabeth Van Lew, despite the age difference.  A very powerful actress for a very powerful role. Maybe Winona Ryder, instead?  While a small role in the big scheme of things, Leonardo DiCaprio could play the Libby clerk/spy,  Erastus Ross.
Tom Hanks? We already know he is one of the greatest actors of our time.  He could be Rose.  He has already shown he can lose weight as easily as some of us lose our keys.  30 pounds? 40 pounds?  No problem. If there is one thing Civil War POWs lost, besides their mind, it was their weight.
Plus, the conditions of a POW camp were just gross so a talented director could really drive home the concept of filth.  With sanitary conditions worse than some present Third World countries, it would give Hanks the opportunity to continue his climb on the Academy's list of "the actor with the most Hollywood pee scenes or references".  He already has "League of Their Own", "The Green Mile", "Castaway", Forrest Gump", "Apollo 13", "Road to Perdition", "The Money Pit", "Saving Private Ryan", "Splash", and "The Terminal" to his credit.
Forget Tom Cruise in any capacity. He's just a creep.  Sorry, Mel. You're out, too.   Sadly, history shows that antisemitism existed in 1860's Virginia.  Food shortages, high prices, and the lack of solid war gains  were blamed on Richmond's Jewish population simply out frustration, ignorance, and, perhaps most significantly,  old-fashioned prejudice.   You'll be sad to know that the ovens at Libby were for cooking. I can only imagine how you would wreck the movie, especially if you directed it.  I second my own motion if Ryder were to get the Van Lew gig.  You can't play nice.
Of course, when Jim or Steve call me for input on the screenplay, I won't get big-headed.  I promise.  I'll simply refer them to Wheelan's book.  It is that good.  When the film racks up Academy Awards, they can  just credit me for being the guy that suggested the book that  the movie is based on.  That should get me a few tickets for the afterglow.