Many of the Red-tailed Hawks you see here in Michigan are "eastern" birds. For that matter, most of the Redtails you see east of the Mississippi are "eastern".  A creamy chest and dark marks across the belly (they vary from bird to bird, but are always present) are solid field marks.  Patagial bars, which correspond to the "biceps" on the bird, are easily seen, too, if the observer gets a good look.  You might think of them as vanilla ice cream.  While beautiful, they are "plain Jane" birds compared to their Western counterparts.

What's going on out West? It's like Baskin Robbins, except instead of Banana Nut Fudge, Cherry Macaroon, and Chocolate Almond, it is Harlan's Light Morph, western Light Morph and juvenile Dark Intermediate Western?  I could go on all day!  In some cases, subtle little field marks can separate the birds and give you the opportunity to put a name on it.  In some cases, under some conditions, forget it.  You don't stand a chance....
So, needless to say, a hawk that does not fit the "eastern" profile here in Michigan is worth a closer look.

Following up on a lead from Hawkmeister Don Sherwood, time was spent Saturday morning hanging out by an expressway -   I-275 and Van Born Road to be exact.  He will be the first one to tell you that ID'ing a hawk at expressway speeds is not always a gimme, but you can get most birds most of the time once you know what you are looking for.  A few days back, he saw a bird there that he suggested was in need of a second look.
A "dark buteo" was basically all he could get out of it.  One might think that a dark Rough-legged Hawk would be the obvious answer, but Don is no novice when it comes to raptors.  He was suspecting a dark Red-tailed Hawk of some sort.
Sure enough.... 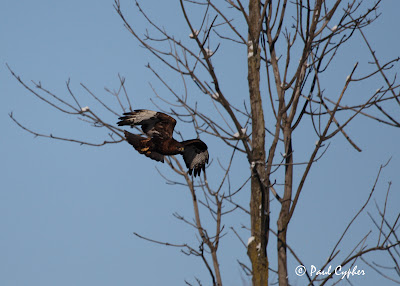 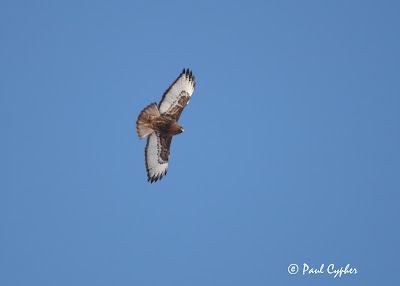 As you can see (or maybe you can't...I dunno...), this bird clearly shows the shape of a Red-tailed Hawk. If you look close, even the namesake tail  has that reddish cast.  While some may think the rest of colors are wrong, they're not.  They are completely consistent with the Rufuos morph of an adult Red-tailed Hawk.  That reddish tone on the breast combined with the dark belly basically cinch it.  If you slam your face against the desk, bite your lip, and squint, you can almost see the patagial bars.
Impossibly rare in Michigan? No.  But I think it is safe to call them "rare".  Outside of the Detroit River Hawkwatch or Whitefish Point, I have to think your chances  of seeing this bird in southeast Michigan are pretty damned low.
Interestingly enough, about 12 months back, Don had a suspicious-looking dark buteo at I-275 and Van Born.  Speed, rain,and a work schedule prevented him from getting a second look.
It certainly makes you wonder.
If you're in the area, look for the dark buteo.  It is not vanilla, like all the rest. Think Chocolate Fudge.
Posted by Paul at 10:08 PM

Paul- Cool bird! Another similar bird, either a rufous morph or dark morph (cannot remember off the top of my head) has wintered at Allegan SGA for many winters now, including this one. Very rare for MI, no doubt...