Greetings from the Great White North! "White" and "North" both apply, but "Great" is not such a good word if you are thinking birds.

I am currently holed up in Paradise, Michigan with some friends. We figured a late year trip for some boreal birds might be fun, right? Maybe some owls around the Soo and perhaps some boreal passerines near Whitefish Point?
After an early start from Metro Detroit (~5am), snow squalls from lake effect weather were a problem the whole way. While posted speeds are 70mph, we rarely got to 55mph. How did they do it in the old days? The bulk of the time (what little we had left) was spent at Hulbert Bog about on hour west of the Soo. Beyond that, we were just trying to manage the road with the winds and blowing snow.
We could count on two hands, if we had polydactyly, the number of bird species for the day - only 12. For the most part, there nothing of note. Some Canvasback and Scaup at the Straits below the Bridge, Ravens here and there, and a group of Chickadees at the Hulbert Bob who really needed a Boreal Chickadee as a companion. A Dove here, a small mystery falcon there. Not much. Really disappointing for the most part...with one notable exception. West of Paradise, feeding easily 20 feet up in a tree, sat a Ruffed Grouse. 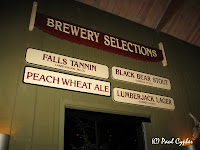 Of course, any trip to the region would not be complete without a trip to Tahquamenon Falls. No, not the Falls, the Pub 33 Brewery at the Falls (we got there after dark). I was there on April 23, 2004 and knew they had to have had few new brews in the last 5 years. Sure, enough, they did! The Peach Wheat Ale (#688) and the Lumberjack Lager (#689) were both pretty good. The Peach was exactly what you would expect - peachy. The Lager had something going on there but we couldn't figure it out. But we did not let that stop us from liking it! I gave them a "3" and "4".

It is possible those people at the campground had been drinking at the Pub. What in the world would possess people to camp when temps are going to well belowing freezing and windchills are sub-zero is beyond me. But, to their credit, the Christmas tree in the campsite looked pretty cool!
Tomorrow? More time looking for those pesky passerines and then off to bungle around looking for owls. Perhaps I will check back in if I get the chance....
Posted by Paul at 8:36 PM