Every now and then, I get a bug. No, not an "illness" bug, but a bug to do home improvements. While some people would think that a desire to move forward with a do-it-yourself home improvement project is actually an illness of sorts, I think painting a room is manageable.
Usually...

So, for purposes of this exercise that defines the idea of "hire a professional", it would help if you knew the layout of my bedroom. The accent wall would be the wall at the head of my bed. Wall #2 has two doors - a door to the bathroom and the main door. Wall #3 has the closet door (a walk-in) and is mostly, well, a wall. Wall #4 is mostly wall (imagine that!) with the one and only window.

The plan was to color the main wall a dark green with the 3 remaining walls a light green. Why green, you may ask? Everything else in the room is green (bedding), dark cherry (book shelves and night stand), light beige (carpet) or an old coppery green (ceiling fan, lamp, and bed frame). So, if you ask me, green tones to the walls would be a super look.

Hmmmm, now what green should I get? Have you been to Home Depot lately? Lowe's maybe? The available colors are enough to make you feel green while spending it, right? Colors include Asparagus, Mountain Forest, June Vision, Celery Sprig....oh, I could on and on. There are only dozens to choose from. Mind numbing, isn't it?

So what did I pick? Christopher's Robin's Swing. Now, before you roll your eyes and chuckle at my masculine bedroom with paint named after a child in a poem, understand a few things. First, it was a nice green. Really! Second, it was a free can of paint! Basically, a deal had been haggled with a friend - I get a gallon of paint for 10 minutes of my time setting up their computer printer. That color would be my accent wall. I just needed to find a lighter shade of green for the three remaining walls.

Now, I did preview the color on the wall at my friend's house, but admittedly, it was poorly lit. I had the card, saw the wall, and said "Yeah, this will do." After my trip to Home Depot, "Skipping Stones" got the nod for the other walls. Hey, they were on the same little card and looked okay together, all right? So, yes, technically this guy was painting his wall with Disney colors. But, get off me, okay? Would it have been better if I painted things "bile green", "duodenum green" or "bruise green"? Just shades of green, right? Shades of green. Names don't mean diddly.

Within a few hours, everything was taped up, and the first coat went on the accent wall. "Funny. I thought it was going to be more green... Oh, it still wet. But, hey, this looks great!" Coat number two goes on a bit later. Hmmmmm...still not quite as green as I thought it would be. Ahhh, its the light. The paint looks great!

The following day (this would have been Thursday), I started on walls #2, #3 and #4. The first coat went on just fine. At least, from what I could see. It turns out "Skipping Stones" is more like "We Skipped the Pigment". I could hardly tell where I had painted and where I didn't. All that time and effort and I can barely see anything? Hmmmm, I gotta do something. Back to Home Depot. Let's try "Dried Palm". By dinner, the first coat is on. By bedtime, the second coat is on. The tape comes off. Final clean-up should be set for Friday morning.

Friday morning comes. Who in the hell snuck into my room and re-painted everything? These colors? Nasty. That green on the three walls does NOT look right with the accent wall! Okay, I'm done trying to match colors. Forget it. Accent walls are great, but I must be color blind or something. I have enough of the Christopher Robin's Swing to finish the room. Wall #2. Done. Wall #3. Done. Wall #4. Arrggghhhhhhh! Not enough! Big deal. Back to Home Depot to get enough to finish the wall and therefore complete the room. (If you are keeping track, by the way, that would have been my 923rd trip to Home Depot since I began to conceptualize this project.) 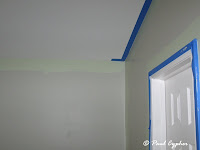 IT DOESN"T MATCH! The original can was totally wrong. Holding the new lid against the old lid, it is crystal clear now - all the color matching issues were rooted in two problems. One - the original can (the hand-me-down can) was botched when they (the store) mixed it. Two - I shouldn't be painting. What was supposed to be Christopher Robin's Swing was looking more like Winnie's Pooh. More of a brown-green than green. The picture at the left really shows the shocking contrast. The green line on the wall should perfectly match the wall itself. Not even close. (For the record, the color was fine. It really was. There was just no way to duplicate it....) 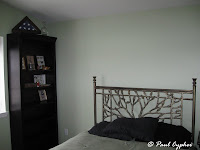