My alarm was set to go off at 3:45 but I was awake by 3:30. By 4:30, I was on the trailhead of Slide Mountain, the highest peak in the Catskills (4200 feet above sea level).
My target species? Bicknell's Thrush. The Cliff Notes version of the story goes like this, okay? They were first described by an amateur ornithologist, named Bicknell, who collected one, on Slide Mountain, in the late 19th century. Other scientists came along and said “No, sorry, it is not a new species. It is really a Gray-cheeked Thrush.” In the last decade or so, the evidence has piled on that says “yes” it is a different species. (For the record, the Catskills are not the only place in the eastern part of the continent you can find them. All of your taller peaks in New York, Vermont, New Hampshire, and Maine have them. I just found that the Catskills would be the easiest mountains to work into this trip.)Of course, with such limited range, it automatically became a very rare bird once it was decided that it was truly a unique species. That means birders like me have to go get it.

I tried to remember what time it was when I reached the summit, but I don't recall. Suffice to say, it was pretty damned early. As the altitude changes, the vegetation changes along with it and therefore the birds. By the time I was at the top, the coniferous vegetation favored Winter Wrens, White-throated Sparrows, and Yellow-rumped Warblers. The Blackpoll Warblers were a treat, too.

Significant parts of the trail are really rock-and-root scrambles (with the occasional creek crossing). Very few sections of the trail were “flat”. Tennis shoes would be the death of you. While the sun was starting to lighten things up at tad at 4:30, it was still very dark in the woods. Forget the headlamp. I had a giant Mag-Lite! By the time I reached the top (a 2.7 mile hike with a 1780 foot altitude change), I had to put my sweatshirt back on. It was a bit chilly and low-lying clouds made it sort of damp, too. Before long, I found myself playing stupid 'cat-and-mouse games' with a thrush. Finally, there it was – for the briefest moment – Bicknell's Thrush! Ha! #630! I will flat out admit it was not the most rewarding look I have ever had at a life bird, but it was certainly good enough to make the call. I had the option of continuing to track it and get more looks, but opted out. It was breeding season, and I saw what I needed to see.

One of the coolest parts of the whole morning was not seeing the bird (barely), but simply seeing no one. For all intents and purposes, I had that entire mountain to myself. Most of the time, I was not hearing anything that suggested that I shared the planet, let alone the mountain, with anybody else.

The wind. Some birds singing. My boots on the rocks. The occasional insect (which were absent for the most part). Other than that – dead silence. Incredible. I am very glad I took that moment when I first had a nice vista to soak it in. The mountains were shrouded in clouds, so there was that feeling of being one of those climbers you so often see pictured on the summit of Everest – the world below you and nothing else above you. Granted, there is a huge difference between Slide and Everest, but I think you get my point. Also, prominent early 20th century naturalist John Burroughs spent a lot of time of Slide and it influenced his writings. I can see why. There is even a plaque commemorating him at the top. Any way you cut it, it was an awesome morning.

I took my time coming down the mountain. Contrary to popular belief, coming down a mountain is not easier than going up.

It is just as challenging (if not more), but in a different way. Your muscles ache going up because you use them to hoist yourself to the next level. Your joints ache on the way down as they take the brunt of that “deep step”. For the record, you also had better have your thinking cap on. If you are ascending and you fall, you fall forward and there you are. However, if you are descending and you fall, you could in trouble. Think of it like stairs. Would you rather trip going up or stumble coming down? Falling ass-over-applecart down a stretch of rocks does not sound like fun to me!

The birds at the lower elevations included Black-throated Green and Black-throated Blue Warblers. Ovenbirds where in abundance (again) and Least Flycatchers in the parking lot. A Black-and-white Warbler song once and I flushed a Ruffed Grouse at one point (well, I didn’t “flush it”. I disturbed it and it flew away!)

I was off the mountain at noon. What did I do with the rest of my day? I went home. Home home. As in metro Detroit. Yup – a straight shot. By this point, I knew rain was coming. I had blown my budget out of the water and my three target birds were under my belt. So, I plotted a course from the Catskill Mountains to Detroit. I was home by 11pm.

One highlight along the way was still in the Catskills. My GPS took me over a mountain top (certainly not as high as Slide). The whole top and been clearcut and was now accommodating tall grasses and wildflowers. I spied a sparrow on a sign and stopped to get a better look. I was rewarded with a nice look at a Savannah Sparrow. But in putting the windows down, I was rewarded with songs and flights of Bobolink! The field was full of them! 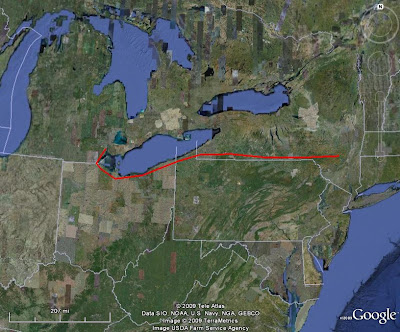 
Next trip? Unknown at this time, but it may be Wyoming in December for some hunting... Traveling to the that part of the country in the winter should be an opportunity to add some states birds. We'll see!

Paul, so you did see the Saltmarsh Sharp-tailed Sparrow then? Where did you find it? Also, what was your third life bird? Did I miss this in the trip report? Congratulations on your Bicknell's!

You bet I found it! I managed the first one at Truitt's Landing because *you* told me where to find it!

I think you may need to go back and read the previous entries. Each day of the trip gets it own entry.

Great post, bud. Enjoying a Sierra Nevada at the moment and listening to the resident House Wren while watching the Tigers.
Gotta get out and do a bird trip soon though.

Paul, excellent. It makes me so happy when that happens. Also, thanks for the heads up on looking at each day. I saw Stonewall Jackson and I thought this was about something else. I can't believe I even said that. I should be reading about Stonewall Jackson. I'll check out your other days.

Hi Paul, It's Greg from Buffalo (we were looking for the Bachmans Sparrow in North Carolina) .. GREAT blog! I will have to keep track of it. My photos from that day are here:
http://wgrc1971.blogspot.com/2009/06/june-10-2009-birding-weymouth-woods.html

How long did it take to hike up Slide Mountain. My wife has an art residency near there and we were thinking of trying it out the 4th of July weekend.... Or just a low elevation search for Worm Eating Warbler...

Tell me about the Emerald Ash Borer .. they say they are arriving here, and our yard is all ash trees ...

Hi Greg, good to hear from you! I made an effort to remember when I reached the top of Slide but I should have written it down - I simply don't remember. It could not have been more than 2 hours or so (plus or minus a bit). Any way you look at it, you two will enjoy the hike. I would suspect your chances of Bicknell's Thrush would be down a bit, but not impossible. Even if you don't get the bird, the hike is great.

As for your trees, as I understand it, they will last about five years (at the maximum)once the infestation begins. Don't keep your hopes up... :(

I am sure that $$ and time were a concern but you blew by a ton of great beer places in NY and PA on your way home. Too bad...but I see from your totals....

That you are just beginning your beer quest. Heck, you live in a great beer state as it is! Michigan is LOADED with awesome breweries/brewpus.

For now, I just can't see myself having over 8000 beers! That is pretty impressive! Recognizing that most people think 25 beers is alot, I will be quite satisfied when I reach the 1000-beer threshold. Keep in mind, I plan my trips to see birds and then detour for some beer now and then.

#600 should happen in the next few weeks or so. Yes, I am fortunate to live in Michigan!