Prior to 1992, restaurants in Michigan basically had two options. Option #1 - serve beer brewed elsewhere or Option #2 - don't serve beer. Anyone with an appreciation of fine dining and fine beer knew that Option #2 was rather dumb.
Keep in mind, this only applied to Michigan. 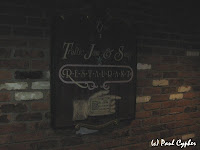 All the other states in the Union agreed that Option #2 blew. They all agreed that a restaurant should be allowed to brew it's own beer. That makes December 18th, 1992 a historic day in Michigan. It was on that day that Traffic Jam and Snug became Michigan's first brew pub. Sure, it had been open since 1965, but that December day allowed them to make a grand step forward. Now and hopefully forever, they brew beer and they do it good.

Saturday night was a great night to head to TJ's. I had been there before (years ago) and I knew I needed to get back. Tucked onto a side street in Detroit, the brewery/bakery/restaurant/dairy (no joke!) is easily overlooked. But the food and beer can't be. Carolina Crabcakes over rice? Super. The Owosso Wheat (#543)? Excellent: easily a 4 out of 5. Golden yellow color with that characteristic cloudiness? Check. Citrusy aroma? Check. On the palate, everything fell into place. Body was in perfect balance. Not too much carbonation. Sweet tones on the tongue. Wow. The only thing holding this beer back from a perfect "5" was the finish. I was expecting something a bit more sweet, but in this case, the slightly hoppy finish was a bit much. It would have been very mild for, say, a pale ale. But for a wheat? Too much in my opinion. (The decor inside, by the way, is awesome. Old lumber and antique sort of stuff you would find in an old barn or warehouse: copper kettles and ancient French doors, to name just two. Very cool stuff. I am very glad the plow, hanging 8 feet over my head, was secure. At least I think it was; it was still hanging there when I left....) 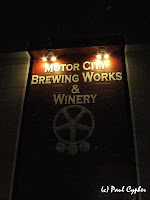 And what do you think is right across the street? Motor City Brewing Works. Funny how those things work out, huh? So what better place could folks go for an different atmosphere and an after-dinner drink? I was only up for one beer on site and knowing I can get some of their bottles to take home (I did) and knowing that I can get some at party stores (I have), I wanted to get something unique for that night. Old Gear Oil (#545) got the call. It was a Flemish beer.

Now, if you happen to be an regular reader of this blog (all six of you), you know I have had Flemish beers before. I am sorry to say that this beer did not live up to the Dutchess. Color was not to be had in the dim light of the place (it was dark), but the smell certainly was - vinegar. Yeah, so what, right? Dutchess smelled the same, right? But from that point forward, the two beers took a vastly different road. I think I could make this beer at home. Add vinegar to grape juice. I swear to you that is basically all I could taste. Vinegar and grape juice.

I found the whole night very contrasting. One brew pub with superior beers. The other? A brew pub whose one beer I sampled might be the reason Michigan was the last to change the brew pub law....
Posted by Paul at 6:17 PM