How It All Started

I'm pretty certain the Gray Catbird is one of the most overlooked birds in the state of Michigan. I don't mean overlooked in the sense that they are common and people can't find them. I mean overlooked in the sense that they are common and most people look right past them and ignore them. I never will.
This morning, I had a chance to walk a trail at Lake Erie Metropark. In addition to watching a Sharp-shinned Hawk get totally outclassed by a Northern Flicker in aerial maneuvers and bumbling on the identification of warbler (it was finally decided to be a Tennessee Warbler), I was amazed at how many Gray Catbirds were there. I would estimate 1 billion. Okay, not that many, but they were certainly in abundance. 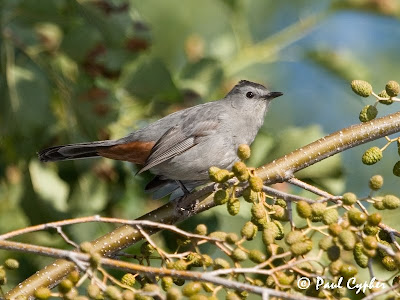 One cooperative individual decided to sit pretty while I photographed it. While it sat there in the sun, I was really given a chance to appreciate that stunning gray color. Yes, I'm serious - stunning gray color. If you look close, you can see that neat little black cap. You can't look past the chestnut color of the undertail coverts. What a bizarre place for such a cool color.

Of course, for the Catbird, there has to be something more that leads us to its name, right? Yup, they "mew" like a cat. You can listen to it here (but listen through to the end). If that does not sound like a cat, I am not sure what does.

Almost every time I hear one, I am taken back to college. My advisor suggested I take every class possible to round out my classwork for what was anticipated to be a career as a high school biology teacher. By "every class possible", he meant all of Max Adler's classes. He taught a million of those one credit courses, one of which was "Field Bird Study." So for six weeks, every Monday, beginning at 5pm, we would hit the road to a local hotspot in Washtenaw County (I went to school at Eastern Michigan University) and go birding.

I honestly don't recall where we were, but it was either County Farm Park or the Mathai Botanical Gardens. In either case, buried deep in a dense thicket, was a cat mewing. Except it wasn't a cat. It was the Catbird. I can still remember Mr. Adler ( I never called him Max) getting very excited about it. The class stood in amazement as that slick looking gray bird walked out of the tangle and mewed again. Awesome.

Now, some people might wonder why in the world a college guy would care about a bird who thinks its a feline. I can't answer that. I just know I got a kick out of it and wanted to see more. That class was the ticket. I could go on with my list of birds from that first spring as a birder: Eastern Meadowlark, Rose-breasted Grosbeak, White-throated Sparrow, just to name a few. I would spend those warmer spring nights on my porch, sipping a cold ginger ale, (after all, I wasn't yet 21) while flipping through the field guide and wondering if I would see "one of these" or "one of those."

So what in the world would entice me to spend more and more time studying birds? Well, its obvious now, right?

The mewing, little, gray bird with the orange butt.

Thanks, Mr Adler! I sincerely mean that!
Posted by Paul at 8:14 PM