I'm a proud owner of a Garmin. You know what they are, right? Those little dashboard jobbers that help people stay on course. They show a little map and even talk to you as you drive. It asks you "Where to?" You push a few buttons. Fastest course or shortest one? Push a few buttons more and, voila: (with that robotic woman's voice) Turn left on Allen Road. Gas on right. I bought one before I went to Texas and I don't regret it. They are super little devices.
Lots of wildlife divide their time between breeding grounds and wintering grounds. Birds especially. Some will even fly to the other end of the planet. They don't use Garmins. Or a Magellan. Or a TomTom. Their GPS is internal. I am not writing here now trying to explain how it works (there is alot we still don't know), but I love to see it in action.
I had the better part of the day to spend at Lake Erie Metropark today. Hawk migration is well underway and I wanted to see what there was to see. It turns out, as some of you well know, Lake Erie Metropark is one of the best places in the United States (if not the Western Hemisphere) to see migrating birds of prey. The Detroit River International Wildlife Refuge now manages the count (known from now on as the Detroit River Hawk Watch). You can read about it here.
So today? Well, a little slower than I expected. "Only" 1,266 birds. The picture here shows a few dozen Broad-winged Hawks. Multiply views like this a few times over a few hours and there you have it. Getting hundreds in an hour suddenly isn't so hard! 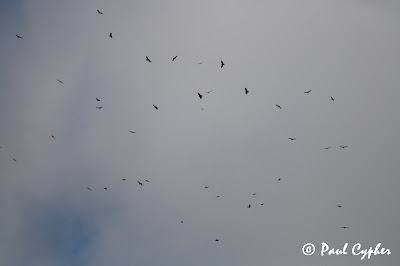 Each bird has what is basically a built-in Garmin. "Where to?" South America. Fastest or shortest? Yes! It turns out for these birds, the fastest is the shortest! I can hear "her" now: Fly south. At Lake Erie, turn west. Turn left in Michigan and proceed 1,300 miles to Rio Grande Valley of Texas. Continue 2,300 miles to South America. 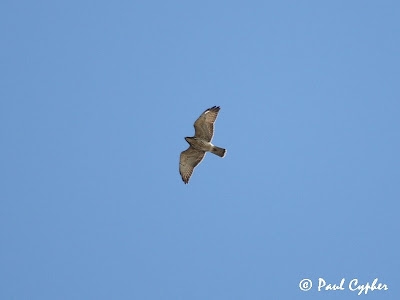 Tomorrow has the makings of a wonderful day at the hawkwatch. The flight ended late this afternoon. The cold front has cleared the region (which means favorable winds and rising barometric pressure). It is mid-September which means literally tens of thousands of Broad-winged Hawks have their GPSs programmed for destinations as far away as Brazil and Peru.
I am not suggesting tomorrow will be the flight, but I certainly think there will be a flight worth watching.

Just for grins, even though I know how to get there, I might program my Garmin tomorrow for "Lake Erie Metropark."
Posted by Paul at 9:43 PM