Cemeteries are nothing new to me.

With my mom tracing our family tree, it was not unusual for my her to make plans to spend a day or so of the annual family vacation meeting with people to talk about genealogy.  This tactic, of course, predates Ancestry.com, or for that matter, the home computer.  In some capacities, it became a family affair.  In the field, it was not rare for us to get a quarter if we found a tombstone that had been on her hit list.

So here I am  over, three decades later, still appreciating cemeteries. It is not just about who is buried there, but the character overall. To me, new is often sterile while old opens up a whole new world.

If Ohio were a target, Granville would be just about a dead-center bulls-eye.  Located a short skip outside of Columbus, the town is rather, um... sleepy...as you might say.  A metropolis, it is not, with a population of only 5,000 people. In fact, it has been that way for over 200 years.

A few months ago, my work travels took me to Newark, Ohio (just down the road from Granville).  With plans to meet a friend for lunch, the route took me past the Old Colony Cemetery.  Perched on a small hill just a few blocks from downtown, I knew I had to get back there and investigate.  A quick Internet search on my phone (something my mom couldn't do when I was a kid!) showed that 18 Revolutionary War, 39 War of 1812, and 16 American Civil War veterans are buried there. The Old Colony Burying Ground is listed on the National Register of Historic Places.  Quite the place, huh?

With the conference's opening night schedule largely optional, I was gushing with the opportunity to photograph the grounds after dark with a full moon for my lighting.  My buddy Bruce enters his stuff in photo contests and he recently had one where he had to use the moon as the only source of light.  Inspired by the activities of his club, I thought I would give it a whirl.

What could be more fun than full moon photography in a cemetery that is older than dirt?

It probably would have been a benefit if I had checked the rules before I went there. To my dismay, access to the grounds is prohibited after dark. Sure, I could have argued that the moon was so bright that is is functionally "not dark" and that I should therefore be allowed to enter, but I don't suspect law enforcement would approve.

With limited options for subject matter and composition, I found myself in an interesting situation.

The maple tree dominated the scene.  It was my hope to include it somehow.

Further, the cemetery has a sidewalk below the grade of the grounds (remember, it is on a hill). The overall impact was that I was not just looking at the tree, but looking up at the tree, hence the foreground.

Further yet (and perhaps the most important factor), the light was coming from two directions.  I was facing east with the full moon beyond the tree.  The tree was also lit from the front; behind me was a series of street lights.

With my rig on a tripod, I set the exposure for 30 seconds. Sure the image was a bit under-exposed, but I was able to lighten it a bit in post processing.  (There is more here to that story - buy me a beer sometime and I'll tell you.) Some larger stars showed up as streaks so I erased them.  (Yes, some people poo-poo that, but I say "Nay! Mind your own business!")  A quick click in Photoshop Elements converted the image to black-and-white. 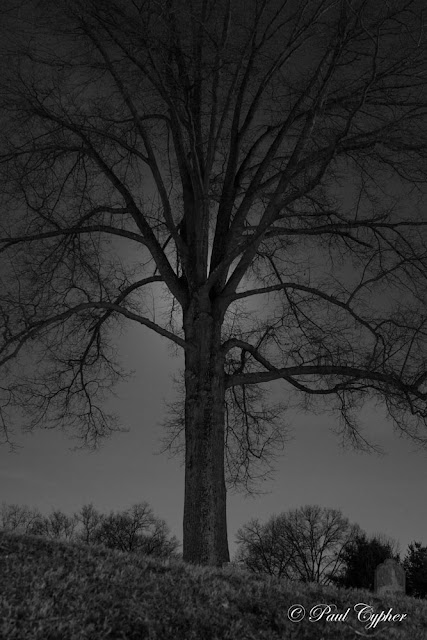 I can honestly say that this is now one of my favorite images.  Generally speaking, I don't have a single favorite anything. Just ask Natalie. Not a favorite beer. Not a favorite bird.  I'm a bit more even keeled than to go out on a limb and say "That so-and-so or such-n-such is my favorite!"  I just don't do it.

That said, I can't overlook the connections here...
A kid.  His mom.  Old cemeteries.  Genealogy.