While restoring a Civil War era farmhouse and surveying the property may not have the same power for everybody,  I thought I would give you a mission debriefing of my week at Field School.   Are you puzzled?  Plastering? Painting?  Surveys?  What is there not to like?

When it comes to old homes, one can't help but to think about plaster walls.  After all, there had to be something before drywall, right?  Plaster, done in the traditional way, is basically 1 volume unit of lime with 3 volume units of sand. It could be buckets, jars, wheel barrow loads, or whatever.  1:3 is key.

Wait.  What is lime?   Take chunked-out limestone, crush it, and then burn it.  The carbon is removed during the burn.  Easy, right?

The lime, when mixed with sand and some water, gives you what looks like cement. But its not; it's mortar.  Once in place, it "cures" by drying out over the next year.  (Yeah...year.)  In addition, a chemical reaction takes place - atmospheric carbon is returned to the plaster mix. In a sense, lime has turned back into limestone. 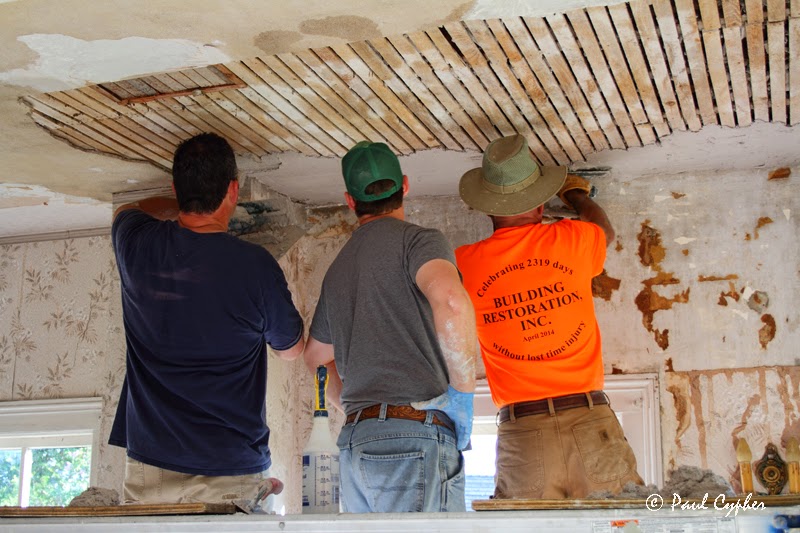 Of course, all of this depends on the "tender". That is the title given to the individual who is mixing the mortar.  If it is too thick, it won't spread correctly.  If it is too thin, it falls out no matter what.  Experience here is a good thing....

Sadly, for me, I did not get a chance to do the plastering. In any case, I can certainly get a better feel for what happens and why old homes still have their walls! They are made of rock!

Plastering wasn't the only thing I didn't to do. Remember, we could pick from three teams and I chose Team 3.  Regardless, Team 2 had it pretty cool, as well.  Quite possibly one of the coolest aspects of their week was the paint analysis.

Lets digress for a quick second.

In the hospital's pathology lab, qualified folks need to look at tissue samples under a microscope to make a diagnosis.  Placing a soggy and deflated tumor on a slide simply won't work.  Instead, the diseased tissue is embedded in wax.  A razor blade or a microtome is used to section the wax block into thin layers (think about this the next time you cut up a block of cheese).   Under the microscope, the pathologist can determine the nature of the tissue.

With care, a tiny paint sample is carved out of the wall.  Tiny. Real tiny. After all, we're saving the place, not carving holes in it!  Chemical A is mixed with chemical B in a small container.  The paint chip is inserted in it.  Overnight, the liquids harden and become clear. Ta-dah - the paint chip is now  imbedded in acrylic.

Using sandpaper, the acrylic block is worked so that the edge of the paint chip is exposed.  You can think of it like cutting open a layer cake. If you come in from the top, you cant see all the layers.  Once the paint is exposed, you plop it on the microscope and look at your colors.  They are quite easy to see.

The picture below shows the microscope, sandpapers and acrylic blocks. As you can see, lots of samples need to be taken. 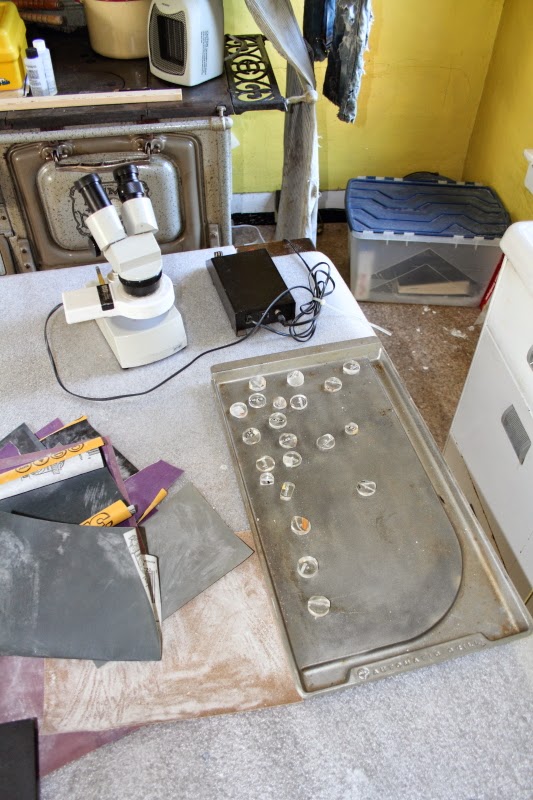 In any case, it appears the kitchen had at least three colors of paint.  The final decision was to paint the kitchen yellow so as to represent the room as it appeared in 1930s-early 1940s.

For the record, a white wall trim, maybe 8" wide, came down from the ceiling.  The white trim was separated from the yellow by a thin black line.  As I had a few minutes to spare one afternoon, I was recruited to paint the white line. They said they needed a dashingly handsome bald man with superior paint knowledge and the hands of a surgeon someone who won't dribble on the yellow.  I filled in and did fine.  That scratching sound you just heard is me marking the "..I just painted trim on a Civil War-era House" checklist...

So while other teams were painting and plastering, Team 3 (my team) got to do a little of bit of everything.

About 1900 or so, Henry Campbell diverted the small stream that ran near his house so it ran nearer to his house.  A workshop, complete with a 6 1/2 foot waterwheel, was assembled over the stream diversion.

Fast fowarding to the early 21st Century, the workshop's fieldstone foundation needed some attention.  Folks focused in the art/science of repair and restoration needed to know the nature of the foundation.  Namely, did the structure have footers?

A footer, by the way, is basically a concrete ring-like structure that one places in or on the ground before you build your house.  They are wider than the foundation so the weight can be distributed. No footers could be big problems years down the round as the structure basically sinks.

Donning hardhats, Team 3 crawled under the workshop to begin digging.  Before too long, separate test pits showed that the original builders did not use footers.  It turns out below a few feet of soils sat compacted sand. Those old builders, like the old plasters, knew what they were doing.  The compacted sand might as well have been concrete.

Sadly, as a buddy of mine recently said, someone "...didn't get the memo..."  If you look at the image below, I have added a red arrow. 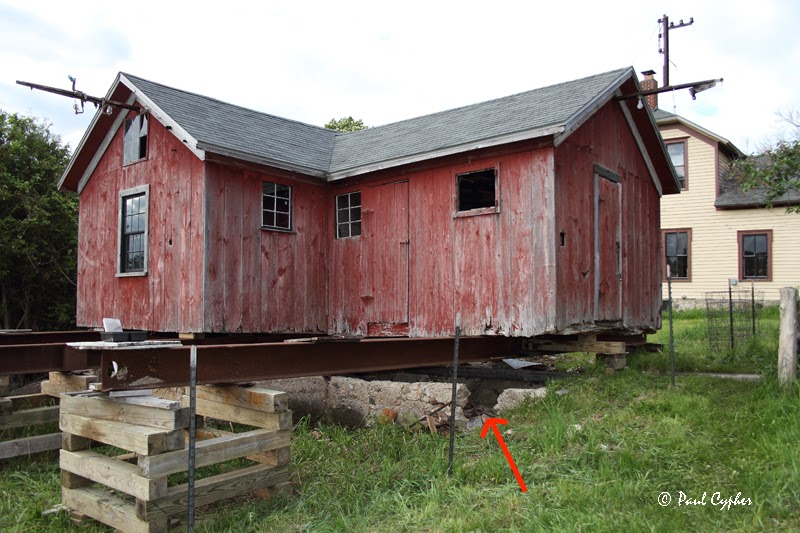 That marks the location were house-lifting contractor punched a hole in the 110-year old foundation so they could slide the i-beams in place for the lifting of the workshop.  Other workers on site commented on the use of hydraulic jacks to lift the shop followed by the i-beam placement.  That would have been much more appropriate!

The image below shows more damage. The left arrow is the an original framed entrance to the crawlspace. The right arrow shows another punchout.  (You can also see the waterwheel.)  Tragic. 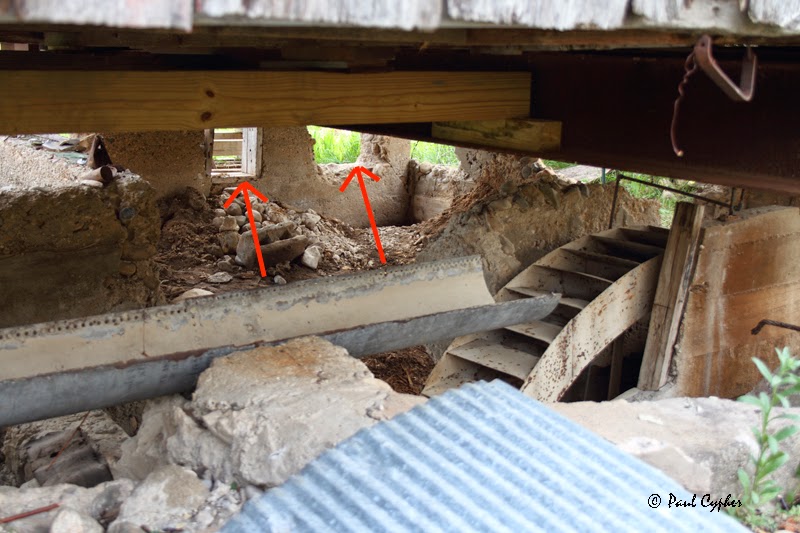 In addition, a solid day and a half for Team 3 was spent on barn detail.

One of the interesting dynamics of the Campbell-DeYoung Farm would be to understand its place in relation with other farms in the 19th and 20th century.  Team 3 had to do barn surveys.

We started to researching old maps at the Traverse City Library.  Breaking up Elmwood Township into zones, our four teams hit the road to track them down.  (Google Earth, by the way, doesn't really help you find identity the age of the barn.  It shows you, at best,  where they are.) 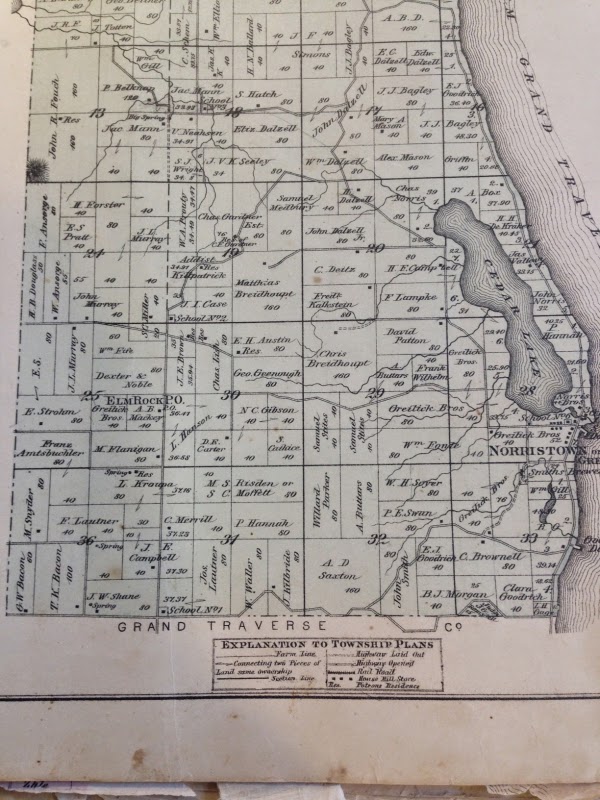 I can honestly tell you I will  never look at a barn the same way again.  Take the image below, for example. 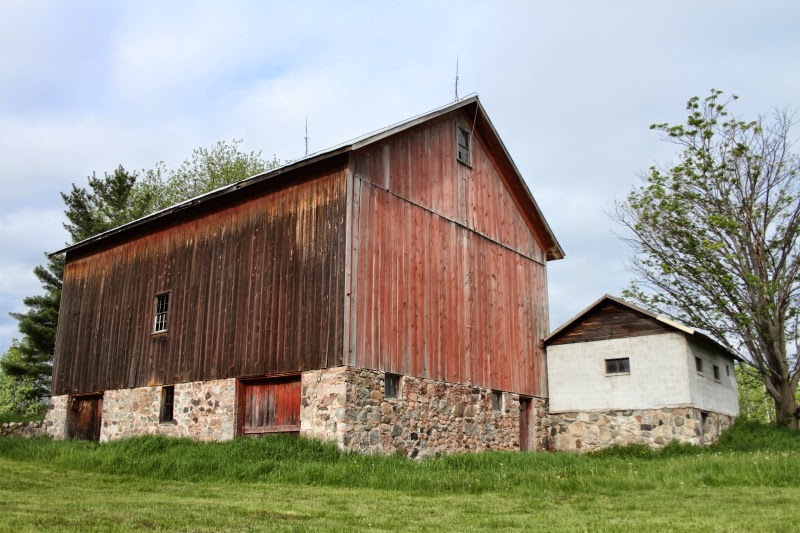 Most of you probably see a barn.

By the end of the week, Team 3 has cataloged 55 barns in Elmwood Township.

For the record, "barning" is just like "birding".  You drive. You see.  You stop.  You call out field marks and record stuff.  You take a picture (the survey requires it).  You raise fists in triumph.  You move along.  You celebrate later with fine beer.

Okay, maybe that is an exaggeration (the fist raising part), but it was fun!. Really!

Speaking of fine beer, I can tell you that the Traverse City area is a fine location for microbrews.  I still  have not updated my beer database in....uh, six months or so. But I can tell you that Right Brain Brewery, Mackinaw Brewing Company, and The Filling Station  are all worth a stop.  Fine beers all.  Bravo Zulu Brewing?  Average.  I just couldn't get past the metal-sterile aspect of this place. It apparently used to be a BMW dealership.

I can FINALLY say I have been to Short's Brewing in Bellaire.  FINALLY!  What a great place.  Both beer and pizza were superb. My only beef is the idea that they don't seem to serve enough beer..... 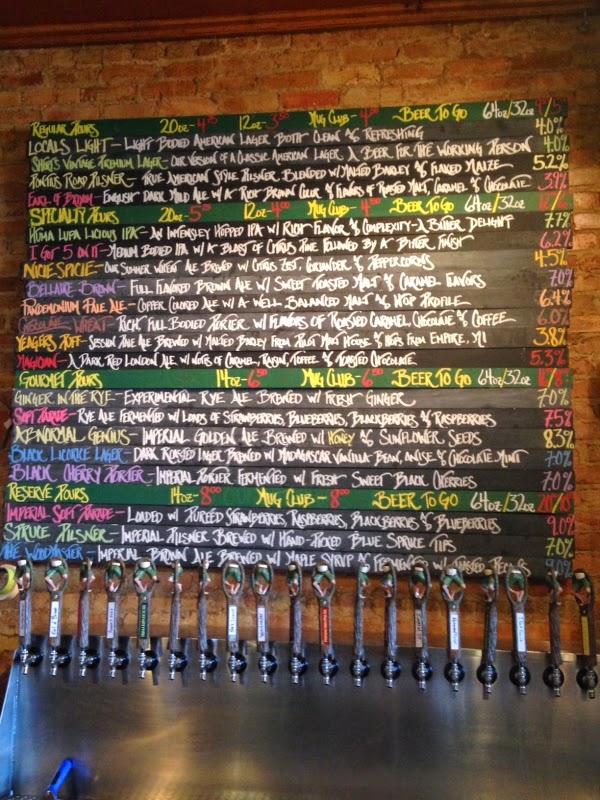 Given the motivation to keep to Campbell-DeYoung Farm as a turn-of-the-century farm (minus big machinery and Monsanto nonsense), it made perfect sense to have a week-ending picnic.  Local foods from the farmer's market, grass-fed beef and the like were perfect.  What a great meal. Of course, more beer was on hand..... 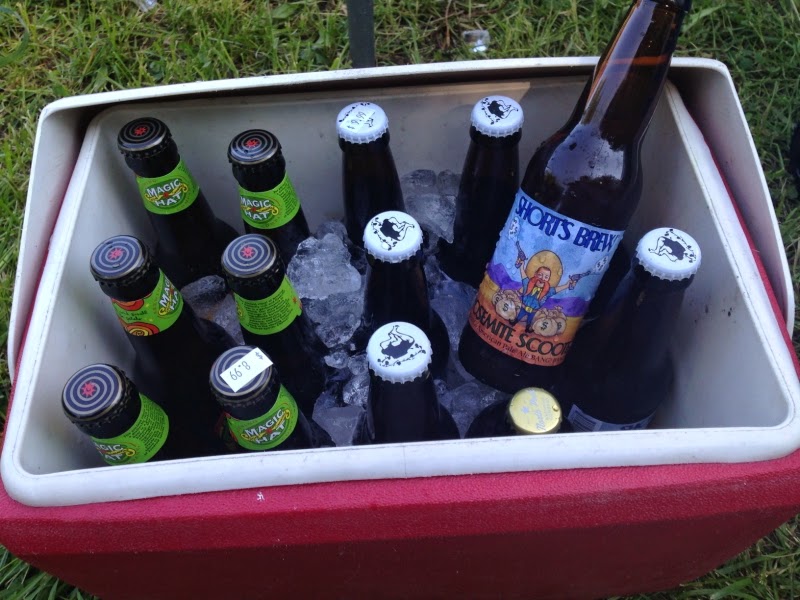 I can honestly say that this week of Field School was, quite possibly, one of the single most incredible weeks I have had outside of vacations.  Sure, it was school and it was work, but most importantly, it was fun.

That "barn" thing. Does that mean I have to add another "B" category to this blog?

Email ThisBlogThis!Share to TwitterShare to FacebookShare to Pinterest
Labels: Back to School, Beer, Blither

Paul, I really enjoyed your narration, especially about the microscopy work (my field). I was surprised that you only saw 3 coats of paint. I have a paint chip here in the lab at BASF w/ over 12 layers, the bottom 3 containing lead. I use it during my tours to show the power of electron microscopes and X-ray analyzers. Neat stuff! Glad you also got to Shorts. Bellaire's a cute town.

Not to nit-pick, but I mentioned three colors, not three coats. The piece that I had viewed clearly had three - green, yellow, and a red/brown. Perhaps there were multiple layers of the same color? I can't be sure as I just took a quick peak when I had a minute and I did not get the official rundown on what I was looking at. I saw three colors, but, I'm pretty sure they had three coats.

One thing to consider would be the homeowners. Perhaps one could argue that they did not dilly-dally with painting as they, being farmers, had other things do that would take up their time. I guess I can't say.