While many birders might struggle to name the most beautiful bird in North America (after all, it is a matter of opinion), most would certainly suggest that the Great Egret ranks near the top.

Standing over three feet tall, they are cousins to the Great Blue Heron, Black-crowned Night Heron, Green Heron and a host of others. All share the same physical features - long legs, long necks, and dangerous, dagger-like bills. Collectively known as "waders", they are commonly found in marshes, river edges,  and other gooey places.

A few days ago, I snapped the image below while at the hawkwatch. 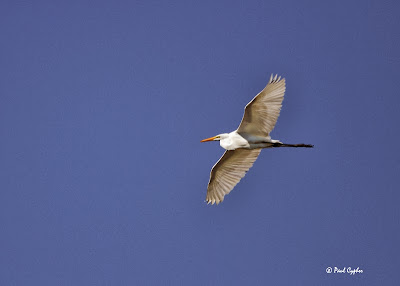 I should...,no...we all should... take a moment and thank Guy Bradley.  Sadly, he can't read this post.  If he were alive today, he would be 143 years old.  Unfortunately, he never saw his 36th birthday.  He was murdered.

During the later years of the 1800's, breeding plumes (interestingly enough known as aigrettes) from waders were all the rage in fashion. In fact, birds in general were fashionable.  Dozens, if not hundreds of species, modeled as pieces or intact specimens, were known to adorn woman's hats. From hummingbirds to small owls, birds were in.

Economic pressure placed huge dollars on egret breeding plumes.  The commercial feather trade was huge. With some prices approaching $32 per ounce, pristine plumes were worth more than gold.  Rookeries were being abandoned as birds tried to find new locations for nesting.  All the while, birds were being shot in massive numbers.   Entire populations of wading birds were being wiped out.

Shootings continued despite the creation of the National Wildlife Refuge System by President Roosevelt in 1903 and the Lacey Act of 1900.    By 1904, 34 game wardens in 10 states  had been hired to stem the tide of the slaughter.

One was Guy Bradley. 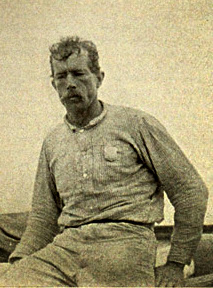 A former plume hunter himself, Bradley denounced the slaughter once he saw its impact.  His knowledge, acquired during his plume-hunting days, made him the perfect adversary for poachers as he knew the strategies and tactics.  As a deputized sheriff, he could arrest those he found violating the laws (something his standing as a warden apparently did not allow).

Sadly, on July 8, 1905, Bradley was shot and killed by a grizzled Civil War Veteran by the name of Walter Smith.  Previous altercations between Bradley and Smith (along with his two sons) brought about threats with finally escalated to reality when Bradley tried to arrest the trio in the midst of a poaching raid just outside of Flamingo, Florida (now within the boundaries of Everglades National Park).

Smith claimed self-defense.  Those that knew Bradley didn't buy it.  Apparently, he was a crack shot.  If he fired first, Smith would have been killed right then and there.  Without enough evidence for a conviction, Smith served five months in jail only because he did not have sufficient funds for bail.
He died in 1935. His obituary made no mention of the events on what must have been a steamy July day in 1905.

Regardless, Guy Bradley's death was not overlooked at the time and is not overlooked today.  His murder (as well as the death of two other wardens during the next two years) forced Congress to enact bigger laws with stiffer penalties.  The plume trade faded away as bird conservation took steps forward.  The National Fish and Wildlife Foundation, in 1988, began presenting two annual Guy Bradley Awards to deserving conservation officers.  A trail at Everglades National Park honors his name.

Ironically, the salt marshes of South Florida claimed Bradley's body.  Buried on a shallow ridge in Cape Sable, his grave was washed away by the tremendous tidal action of Hurricane Donna in 1960.  The stone was recovered but his body was never found.

It's certainly something to think about the next time one sees a Great Egret, especially with those amazing breeding plumes they sport in the springtime.....

(By the way, Death in the Everglades is an outstanding read.  I purchased it when I was in Florida in 2006.)