I Am Getting A New Job

Yes, it's true.  A new job is on the horizon for me.  Nat and I will sell the house, pack our bags, and move to Europe.  I'll be replacing an individual who has no idea what he/she is doing.

I'll be working for the Royal Family.

I'm going to be the official photographer.

Am I that good?  I doubt it.  But I certainly can't be any worse than the hack who took this picture. 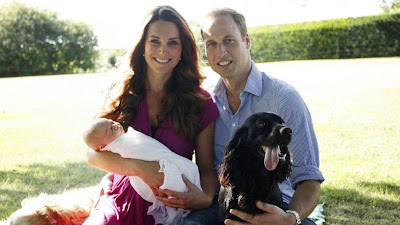 I suspect many of you think this is a nice photo.  I say "nay" - this picture sucks.  I can promise you photographers the world over are wiping their chins of the spttile they coughed up when they saw this image (and then saw how much people liked it).

Allow me to set the record straight. 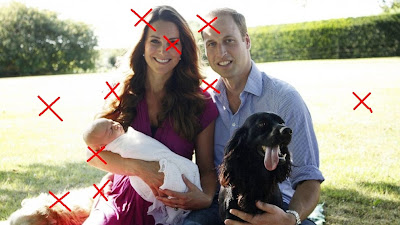 Basically, the image is an overexposed mess.  I learned from a good friend of mine that one really needs to pay attention to the background as well as the subject.  Most of the image is too bright.  Horribly bright, in fact. This image was clearly taken during the brightest part of the day.  Early morning or late evening light is so much more pleasing.

The overexposed issues continue onto the subjects.  The Prince has a giant sunbeam on his noggin.  Said burnout blends right into the bright sky.  The result? To my eyes, a battle axe was used to cleave off a giant chunk of his head.

The same axe clearly continued down his right side and severed his arm. The overexposed portion of the shirt suggests his arm was amputated at the shoulder.   One might argue that "No, he has his hand around her waist...", but you cant see his hand there because the image was.....are you ready?.... overexposed.

A similar argument can also be said of Kate. The overexposed hair on her right (our left) causes her head to take on a funny shape.

Continuing, she, too, also suffered a tremendous injury.  Her arm is also missing at the shoulder.

Don't be confused. That is not her arm holding the child.  That arm is a extra limb growing out the baby's skull.  It has to be. After all, Kate is missing hers.

Her eyes are a bit in shadow. Kate is beautiful and her eyes are a major part of that beauty.  The lighting should have been adjusted to show them off, not hide them.

I am certain the dog in the lower left corner is dead.  Oh wait, maybe we don't know that , but he certainly looks it.  Put him in the picture (like the black one), or take him out completely.

How could this mess have been fixed?  Here goes...

* Invite the family to come back in the evening when the light is more pleasing.
* Two dogs or no dogs.
* Use a fill flash or reflectors as needed.
* Watch the burnouts on the subjects.

My fees are cheap. All expenses paid forever (after all, that is what they get).  Nat and I would also like a special table at all of the breweries in England.

William and Kate, please let me know when we can cross the pond.  We'll be waiting for your call.

Evidently her Dad took the Pics at the Back Garden of his house.Bloody cheapskates!

Her dad did it? Egads. I feel like a total lump now.

I assumed a royal photographer did it.

Knowing the dad did it, it really isn't so bad because he probably didnt know any better.