Have you ever looked up the word "gross?"   Like so many words in the English language, it has lots of meanings.  Big, flagrant, vulgar, unqualified, disgusting and "without deductions" are all acceptable.  (You can ask a Democrat - "Romney for President" is also a new definition of gross.  Oh wait. That would fit under "disgusting"...)

Anyhow, a few days ago, I had a bird sighting I could call gross.

I was out looking for Evening Grosbeaks.  Again.  As you may have heard, they are being reported all over the Midwest.   With reports from all over Metro Detroit, including Lake Erie Metropark, now is the time for me to get them.

After failing to find them at Westcroft Gardens (but securing great looks at White-winged Crossbills, another winter finch looking to come down in big numbers this winter), I set off for Lake Erie Metropark.  Fly-bys at the Hawkwatch were very possible.

Based on my studies and conversations with folks, identifying an Evening Grosbeak in flight should not be too hard if you get a good look.  Basically, they resemble American Goldfinches but are much larger.  Yellow, black, and white are the primary colors on the males while the females sport more gray.  Flight is more bounding in nature; they don't fly straight.   Prominent white patches on the wings are key.

Per usual, the conversation at the hawkwatch was great (it usually is). In my own jovial way, I was joking that if I don't see any Grosbeaks this winter at the park or in Wayne County, I'm just gonna  lie about it.  (Trust me, I wouldn't lie about something so trivial.  That said, I'm sure others have. Anyhow....).

So, with the hawk flight being rather poor after my arrival (it happens often), I was just panning the skies to the north. 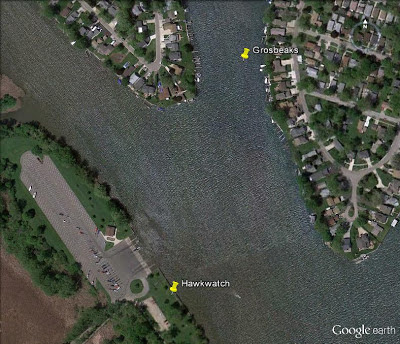 Perhaps 400 yards away (so says Google Earth), I spied a flock of songbirds.  Perhaps 15.  Black. Yellow. White flashes on the wings.  With near certainty, they were my flock of Grosbeaks!

As I recall, I shouted out that some one needs to get a scope on those birds!  Jonathon, the hawk counter, managed to do it. After all, a 20-power scope is going to do a much better job at 400 yards that my 8-power binoculars.  As they descended into Gibraltar, he confirmed them. Yes, indeed - Evening Grosbeaks!

Sadly, there were some frustrations.

First, they did not fly into Lake Erie Metropark airspace.  I know, I know, I know.  You're thinking "Who gives a shit....". Well, I do. I can't count them for my Park list unless they fly over the park.

Second. Only Jonathon and I saw them. My buddy Mark,  a moment or two after Jonathon and I watched them disappear, basically said "What did you just see?"  How awful for me. Here I am thinking I *shouted* to folks to view that flock, but only Jonathon heard me.  NO ONE else saw them.  (That said, my sympathy for Mark is pretty slim. He had a Grosbeak FLY OVER HIS HOUSE!)

So, as the numbers go, those birds became my first ever record for Evening Grosbeak in Wayne County.  My total is now 281 species. Had they flown over  the Park (or at least significantly closer), the Park list would be 252.  It looks like 251 is here to stay for a bit....

So, thinking back to the title of this blog, what is so gross about all this?  Well, Evening Grosbeaks are not vulgar or overweight. There were not 144 birds in the flock.  (A gross is 144 objects.)

Nope.  It is the name of a Evening Grosbeak flock. Gross.  A gross of Grosbeaks.

Maybe I can muster up some sympathy for my poor birding skills, since it took me a week to realize the bird I saw was an Evening Grosbeak.

Nice! Gotta love seeing the ABA Bird of the Year during this epic winter finch irruption. I'm on Lake Ontario and feel that those of us on the Great Lakes have a front row seat for this finch show.