Obviously, some dictionaries aren't up on their current events.

Take the Common Tern, for example.  Sure, they may have been common once upon a time, but certainly not now. With the loss of habitat, colonies are few and far between.  Michigan officially lists them as a Threatened Species. Apparently, there has been chatter about listing it as Endangered at the Federal level.

So, how cool is that they nest under the Free Bridge that connects Trenton and Grosse Ile?

With the breeding colony being monitored by the Detroit River International Wildlife Refuge, biologists and volunteers get to head down there and learn a few things.  Counting of nests, eggs, and chicks is just part of the deal.  Lots of cool info is ripe for the taking.

Natalie is a volunteer with the project and is was on the lucky folks who gets to the enter the colony.

A few days ago, I had permission to make my way down to the concrete and gravel pad with her and see the birds up close. I passed.  I think it would have been neat to see a nest of one of Michigan's rarest birds, but there was something I was just not comfortable with....

When one walks in or near the colony, the frustrated adults go airborne and go nuts.  They fly inches from your head.  They take pot shots at your scalp (they can draw blood if they score a good hit).  If timing is just right, their little pooper opens right up and you're wearing their breakfast.  I'm sorry, but that does not sound appealing.  Poop belongs in a few places - my shirt is not on the list.

So, from the safety of the bridge, I watched from above as Natalie, wearing a construction helmet and old shirt,  went into the colony to switch out the game camera memory cards. (Game cameras, triggered by motion, are used to detect any predator troubles during the breeding season.)  With her shirt slowly becoming speckled, I managed the only one fair photo: 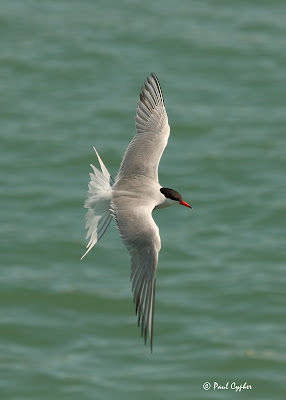 It is worth mentioning that this shot was not the easiest to get.  I flinch.  Alot. Just as I thought I was about to score a photo of a passing bird, one sneaks up on you.  Out of the corner of your eye, you see it coming.  Passing inches from your head, they scream and squawk.  Your instincts kick in and you flinch.  Its that simple.  Good luck holding your camera steady with repeated passes of pissed off parents!

So maybe, when Natalie returns for the next round of work, I'll join her again. I would certainly like to try and get more shots.

While Common Tern poop on volunteer shirt might be a common occurrence, I don't think it will be common for me.  I think I'll stay on the bridge.