If you looked at my previous entry, you saw that I was at the Titanic Exhibit at The Henry Ford today. Sure, I saw it years ago in a different location, but it was worth seeing again.  As fate would have it, today is the 100th anniversary of the disaster.   That might explain the masses of people.
To give the exhibit more personal connections to the visitor, each person is given a card bearing the name and details of a real Titanic passenger.  The last room of the exhibit has the names of all "souls on board" organized in columns based on class (First, Second, and Third plus the Crew) which in turn were subdivided to those that survived the wreck and those that didn't.

I was a hotelier by the name of Thomas William Solomon Brown.  Bound for Seattle, he was traveling with his wife (his second wife, actually, who was 20 years his junior) and daughter. He was last seen smoking on the Boat Deck after safely securing spots on Lifeboat 14 for his two loved ones.  His body, if indeed it was recovered, was never identified.  That is a photo of him to the left.
As a Second Class passenger, this was not horribly uncommon. After all, "Woman and children first!" was the order. This was certainly taken seriously, by some. There is a documented case of a young man who turned 16 while on the journey.  He refused to think of himself as a boy and died with the gentlemen smoking what was probably his first (and certainly) last cigar. Sadly, some apparently did not quite get it.
I started thinking about the timing of the ship's sinking.  She struck the iceberg at 11:40PM on April 14th, 1912 and sunk a few hours later (at 2:20AM on the 15th).  I'm sure those dates and times are common knowledge.
But keep in mind, that is the time on the ship as recorded by her crew at sea.

If you are like me, you like to keep important dates in your head so you can think about them a bit as the anniversary rolls around.  In this case, we can even think about the ship hitting the iceberg 100 years later.....to the minute. How cool is that?
So, I thought I would take a moment and think about the time zone conversions.  What would 2AM be to me here in Detroit? Well, how awesome is it that somebody already did it.
So, tonight, I'll be out with friends.  Old fart that I am, I doubt I will be out until 11:07PM (I'm using Lighttoller's version. After all, he was on the ship!). But, if I am, I will be sure to raise a toast to the lost.  (For the record, you can use this timeline and subtract 1 hour and 33 minutes from each event.)

Just to add a twist to this blog entry, I have is set to post at 11:07PM tonight.  If you are awake and see this entry go live, know that 100 years ago, basically to the second, she struck the iceberg.

Now I am stuck wondering what Mr. Brown's thoughts were.  Did he feel the ship and iceberg collide?  Many passengers didn't.  If so, did he think it would sink? Many didn't.  At what point did he realize he would never see the sunlight again?

I'll leave you with what is considered the last photo of Titanic... 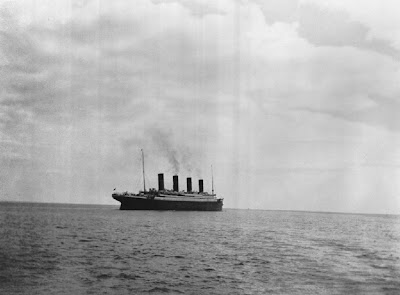