This past Sunday was quite a night.  I'm sure you know what was going on. It is the single largest event on television for the year - four hours of new commercials (interspersed with over-paid guys playing a game while their wives huff, fuss, and point fingers...).
Anyhow, I thought it would be fun to have some friends and family over for some munchies, gourmet pizzas, and beer.
I did so knowing a few things.  The two dips were knock downs (food dips, not angry wives). Mexican Meat Dip?  I've made it before.  Easy and good.  Artichoke Hearts and Cheese Dip I have also made, but only once.  Once is enough to learn that it is a solid recipe and EASY to make.  Basically, shove the ingredients into a food processor and push buttons until it is a paste.  A third grader could do it.
Pizzas? Well, it's getting easier....

After the disaster of my Joseph Merrick Pizza crust, I realized my problem.  The ratio of water-to-flour was off AND I think I might have added a second pack yeast by accidentally botching the math.  Holy crap. Bad. That is like adding twice as much gunpowder to a shell just so you can have more power or doubling the temperature of your hot shower.  Doubling anything is not always good.

With a new approach to the dough (in other words, I read the damned recipe correctly), I was heading in the right direction. A consult with a friend of mine (her dad owns a pizza place!) settled the final issues.  Before long, I found myself with three awesome doughs ready to go.  One went to the freezer.

The second became a re-make of the Garlic and Mushroom Pizza.  As I mentioned in the earlier post, stuffing the mushrooms was really not worth it.  "Chop 'em up and sprinkle the crumbs, parsley and garlic instead...." was the plan. Way good. 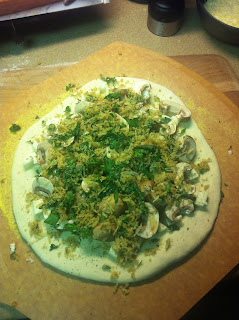 The Sam Adams Might Oak Ale (#1,171) is another PERFECT beer for such an earth-based pizza.   As you might expect, the oaky tones are found in there (no splinters), but I didn't really get 'em until the finish (which is certainly fine!).  I swear the hint of bananas could be detected in the aroma.  Little hints of vanilla were in there, too. Malts - don't forgot the earthy malts. Four out of five in my book! Beautiful to look at, too. 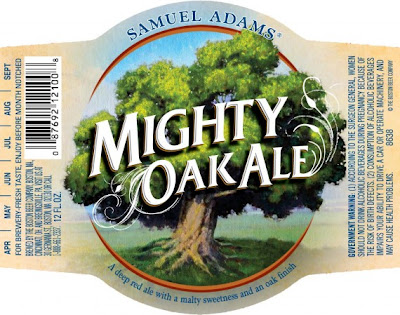 The second pizza is one for the books. Pears, Parmesan and Asiago cheeses (substitutes for more fancy stuff I could not get), fresh sage and a drizzle of honey.  Incredible. The overall sweet tones really make for a different twist to the time-honored pizza.  Who woulda thought pears would be great on a pizza? 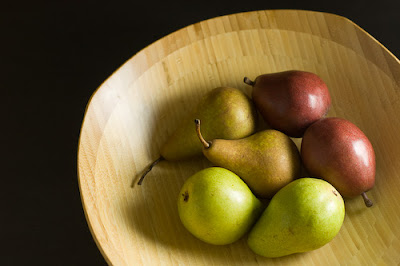 Sadly, while the pizza was excellent, I totally screwed the beer pairing.  Too many people don't take this seriously.  The meal should compliment the drink and vice versa.  Would you have a first-class steak and then wash in down with Gatorade?  How about tacos with milk?  Or Cheerios with beer?  (Wait.  Nevermind that last one. I know a guy who did that exact thing in high school!).  The list goes on and on. You get the point.  In this case, the sweet tones of the pear pizza totally and completely clashed with the Sam Adams Mighty Oak.  By themselves, both were excellent.  Together?  Ooops. I should have gone with a sweeter beer.  Lots of possibilities as I type this, but I think a Belgian or Trappist Ale would have been been worldly.

The dough issues are behind me. No, they won't all be perfect, but they won't be 2-inch think roof shingles, either.  Google "homemade pizza recipes" and you'll see what I'll be doing in the months to come....
Posted by Paul at 9:13 AM