Texas can be quite a hot place. This past summer, they had a horrible stretch of days with temperatures over 100 degrees. I have visited there in the past and I am telling you the place can be brutal. The combination of high temps and high humidity will suck the life right out of you.
Yesterday,  I sent a picture to my buddy Neal. He lives in Texas. Here it is. 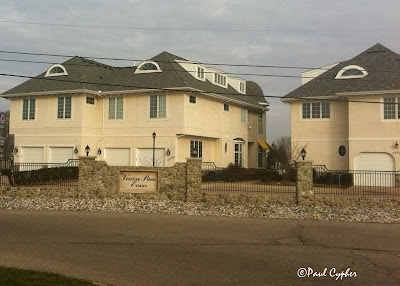 I told him there was a Snowy Owl in the photo and that I would send along better pics later. After all, the image was just taken with my iPhone to set the mood.  (The owl, by the way, is on the roof of the left home to the left of the white pipe.)
His response suggested to me that years of oppressive Texas heat finally got to him. Here it is:

Hmmmmm. Given that it is only a blurry 10x16 pixels, you could make the argument that it is actually a white garden gnome. I see those on roofs all the time. Very common.

He even sent along his heavily cropped image of my original photo. I guess, with electrolytes crashing, sweat in his eyes, and the nonsense of Rick Perry in the background, one might think this is a gnome. 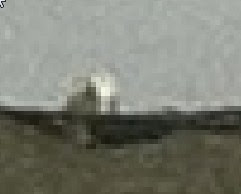 It bothers me to see an otherwise intelligent guy falter due to his environmental stress.
If I could have sent this one, I would have done so. 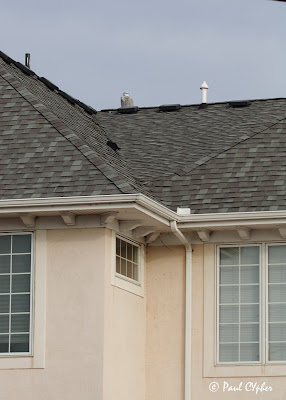 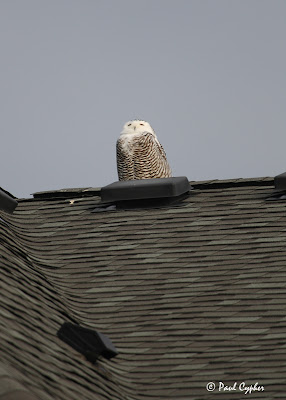 Or this one. She is clearly picking the leprechaun out of her ear. 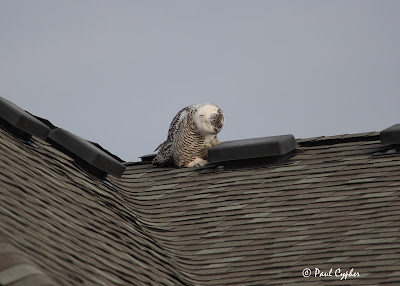 Rest assured, my heat-compromised friend, it is a Snowy Owl.

As far as I can tell, this is an immature female.  She would have been born in the early summer of 2011.  In short, not all Snowy Owls are completely white. In fact, few are.  A mostly white individual would be an adult male.  The immature male, immature female, and adult female have varying degrees of barring (those dark marks).  This article sums it up pretty nicely.   (Don't worry about that bursa thing. It is an internal organ that shrinks as they get older.  It is gone by six months of age.  Using that as an aging tool would involve shoving your finger in her butt. I don't advise that...)
As it turns out, this winter is shaping up to be one of the most impressive Snowy Owl irruptions in decades. Reports are pouring in from all over the place (even Hawaii, believe it it not). I have been birding for basically twenty years, and I have not seen anything like it. They are truly everywhere.
I think it is important to note what is really going on here. This bird did not migrate here just 'cuz. Food resources to the north have apparently crashed. With starvation as the only other option, she, and hundreds of others, set a course for a more southern latitude. Stay and die or move along and hopefully get some chow. It is not a temperature thing; it is a food thing.
In this case, this bird is one of three birds hanging out along a stretch of road in Macomb County. I thought it would be fun to pack up the car with friends and family and go check it out.
It turned out to be one of those birding episodes where we did not have to find the bird. Checking the road and seeing nothing of note on our first pass, we saw a group of birders assembled and clearly looking at something. Hell, don't look for the bird - look for the birders!
So will this be my only Snowy Owl of the winter? No way. Not with things shaping up as they have been. I have three Christmas Bird Counts lined up. We'll find more, I'm sure.
I'll be on the lookout, too, for small, white gnomes. I have yet to see any of them. Of course, it is much cooler here in Michigan.
Posted by Paul at 10:36 AM