The thought of Labor Day far from home in normally pretty nauseating.  It is not so much a homesickness-thing; it is the ulcer I get thinking about the drive home.  The thought of heading  "up north", while fun, is tempered by the idiots on I-75, rotting in traffic jams, and just general commuting non-sense.
Normally.
For whatever the reason, with a few days off over this past weekend, a course was plotted for Chippewa County in the Upper Peninsula for a few days of friends, birding and fun. 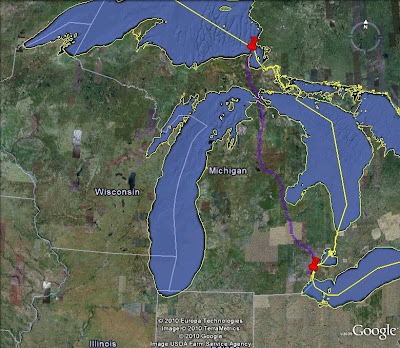 All in all, the trip up was pretty uneventful.  The one highlight of the commute...or lowlight for some, I guess...was crossing the Mackinac Bridge.  Those pesky winds (40+ mph) made for an interesting drive across the Straits - in the dark. Recognizing bridge engineering  has improved leaps and bounds since Galloping Gertie, we were fine.  What's the big deal? Besides, they won't shut down traffic until winds exceed 60 mph so we had room to spare!
Unfortunately, clouds greeted us at sunrise on Saturday. After a quick bite in town and spectacular views of two Merlins behind the hardware store in Paradise, we made the trek out to Whitefish Point.  Sure, there is a lighthouse there, but it is a legendary place in the eyes of many birders, too.  That peculiar spit of land that sticks out into Lake Superior can be quite something.
Basically, much of the birding is done like a hawkwatch - stand around and let the birds come to you.  For those opening hours, they did.  Red-necked Grebes by the hundreds zipped past.   Sanderlings hanging out in the, uh, sand, were nice to watch from only a few dozen yards.  The White-winged Scoters were nice, too, but that was not what we came for...
Jaegers are not gulls, though they look similar.  Simply put, they own gulls.  Known as a kleptoparasite, they steal food from gulls when they can't snitch their own.  After breeding in the arctic, they move along for the migration season to destinations in the tropics.  While Whitefish Point sees only few dozen a year, that is considered pretty good by regional standards.  If you want to see jaegers in Michigan, it is one of the best places to do it.
Unfortunately, while we saw at least seven different birds (including three together!), the distances were just stupid.  The ridiculous west winds (20+mph) were blowing alot of the birds out over Whitefish Bay.  But, such is birding.    On a cool note, those seven birds,  Parastic Jaegers,  were part of a record day at Whitefish.  13 total were seen. The previous one-day record was six or seven.  Safe to say, that record was smashed.
Realizing that rain was coming, the winds were high and the birds far off, we went to find goodies on our own. Hah. Nothing doin'.  Driving back roads and hiking various trails for this, that, and the other turned up very little despite high hopes  In case you needed to know, birding in the rain just sucks. But, you don't drive hundreds of miles to sit in the hotel room.  As they say, there is no such thing as bad weather - just bad gear.
Dinner in Paradise is a no-brainer for a beer nut.  The Pub 33 at Tahquamanon Falls State Park is well worth the trip.  While some people think of porcupines as obnoxious rodents who chew anything, their namesake, the Porcupine Pale Ale (#805), wasn't so obnoxious.  While all aspects of the beer (body, aroma, finish) were  toned down a bit, the beer was a nice compliment to my pork medallions (pork, not "porc". That would be gross).  It was not the best pale ale I have ever had,but I can't complain either.
Sunday was a totally different day.  More sun, less wind and warmer temps made for an awesome adventure.  More waterfowl migration was nice, but the highlight of the beach time was clearly the Sabine's Gull.  Its eye-dazzling patterns can better be seen here.  That bird is a total stunner and #343 on my Michigan checklist. The awful commute home was suddenly looking less awful.
Recognizing that the flight at the Point was likely not going to get much better, we left.  It is hard to top a Sabine's Gull!  With the nice weather and no real threat of rain, it was back to the trails and roads.  Songbirds were abundant, but that one remaining target birds still eluded us.
Spruce Grouse, a chicken-like bird of the north woods, can be a real treat to find.  Basically, find where they hang out and walk around.  The trail to Clark Lake was just the spot.  After poking around for over a half a mile, we stumbled into a photographer who had one on the shoulder of the road.  He left, and within seconds, she sauntered out into view.... 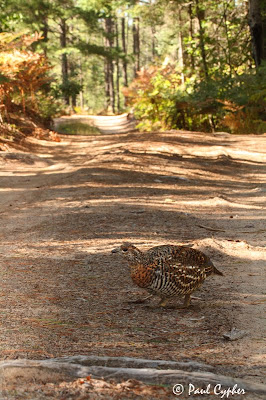 Some people mistakenly think that Spruce Grouse are stupid.  They're not.  Stupid would include any Glenn Beck idea, this kid, this kid, or these people. Grouse, on the other hand, simply know what they need to know.  Food, predators, protection from the elements, and basically how to manage everyday life in the woods are all they need to understand.  As long as you don't suggest you are a predator, they won't have a care in the world.

After she dallied out of the ferns, I simply plopped down prone and snapped away.  20 feet became 15 feet.  After a few moments of pacing with the gap still narrowing,  I gave up - she was too close for my lens.  Nine feet became 5 feet.  Finally, four feet.  After that, she changed course and continued picking at the bugs and seeds in the sand.  That's how we left her... 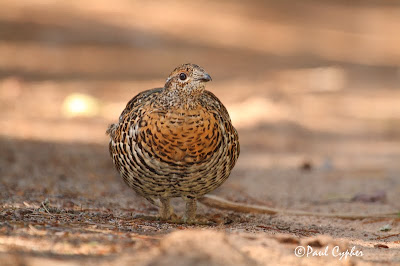 Interestingly enough, I have no recollection of seeing my first one.  This extraordinary sighting was not it.  Apparently, according to my notes, I saw one (life bird #480) on April 14, 2000 on Vermillion Road.  Usually, a note like that jars a memory and you can somewhat recall a mental image of some sort.  What it was doing?  Male or female? Good look or poor at best? Morning, afternoon or evening?  I don't  recall.  At all.  Hmmmm. I guess that is why we keep notes. That said, I'll never forget this beauty.

Dinner was again at the Pub (no new beers) with some evening hours hiking around the Falls themselves.  The Upper Falls, the second highest east of the Mississippi River at 50 feet tall, are really quite something.  Don't be alarmed by the brown tones.  Upriver, tannins leach out the cedar swamps and change of the color of the water. 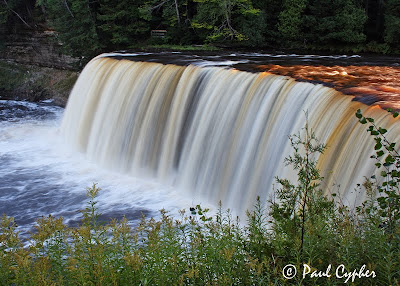 Unfortunately, weather-wise, Monday turned out a bit like Saturday - cloudy with a threat of rain dumping on you at any minute. While it never did (at least while we were in the UP), the overcast skies put a chokehold on your mood sometimes.  Despite our best efforts in multiple locations, Black-backed Woodpecker, a burned woods specialist, could not be located.

A quick stop at Hulbert Bog for possible Boreal Chickadee turned up more songbirds, including 1.9 billion Blue-headed Vireos,  and what was likely a Gray Jay. That peculiar laughter, just far off of the road to prevent a sighting, was most likely the "camp robber."

Fully expecting a disastrous 400-mile commute home with traffic and all, we bid farewell to the UP and moved along.  A pre-planned dinner stop at the Big Buck Brewery provided my 806th beer, the Antler Ale.  Yeah, okay.  It was there. Nothing special, which is typical of my beers from there.

On a more important note, I secured a bottle of the Raspberry Wheat.  I already had it many months ago.  This bottle was empty.  Really.  I wanted,... no, I needed this empty beer bottle even though I won't have it for long.  Confused?  It will become more clear in the weeks ahead.....I hope....

In spite of my concerns, the commute home was easy. No accidents, traffic jams or stupidity of any kind.  Smooth sailing.  I suspect the iffy weather over the weekend sent some people home early.  Also, it might be an economy thing.  Nobody has a job so nobody travels.  Those that had cabins "up north" easily could have lost them.  I'm speculating. What do I know....

From a lister's standpoint, this trip was pretty productive.  My Chippewa County list rose to 131 species from 108.  I have never been here this time of year, so the songbird migration helped quite a bit.  The jaegers and Sabine's Gull were new bringing the Michigan List to 343 species.  All travels totaled this year, I now stand at 251 species.
Posted by Paul at 8:10 PM