What Have I Been Waiting For?

Despite the pleasant temps in the past few weeks, I have only recently begun my grilling this season. The testosterone is flowing, fists are thumping and the gas is lit. Let the flames begin!

With the Memorial Weekend calling for rain on Monday,and with other plans developing, I opted to have friends and family over on Sunday instead of Monday.

Cheese and grapes with the Aprihop Pale Ale from Dogfish Head Brewery were waiting for the guests when they arrived.

Plum Porter Barbecue Sauce over chicken sounded pretty damned good. For whatever reason, fresh plums where a bit hard to come by. Very few places seemed to have any available and I was not about to run all over town looking for them. Dried plums were on hand, so I used 'em.

Yeah, you read that right. Dried plumes.......otherwise known at prunes.

No big deal. Chop 'em up and put in the pan with onions. Before too long, paprika, garlic, salt, pepper, honey and a big ole bottle of Sierra Nevada Porter were added to it and dropped in the blender. Chop chop. Done. It was added to the grilled chicken in the final minutes of cooking. All in all, not too bad. I think I need to secure real plums next time and get the black bean garlic instead of straight up garlic. I needed to improvise a bit as I went...

Grilled asparagus with gobs of olive oil, salt, and pepper combined with a simple side of pasta rounded out the main course. 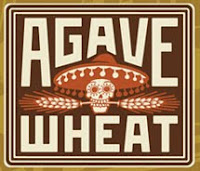 Of course, you can't have such a good meal with out trying a new beer. The Agave Wheat (#748) from the Breckenridge Brewery in Colorado was a nice twist. Sure, I could have had the porter that was used in the sauce but I was not sure I wanted such a heavy beer on such a hot day. Wheats seem like such thirst quenchers. All in all, I can't say too much about this. Yeah, it was a wheat, with all the standard wheat stuff - color, aroma, etc. The whole agave nectar thing (a sugar substitute) was lost to me. I did not notice anything radical going on here. That said, I don't think it was bad. It was bit dry on the finish, but so what in the big scheme of things. 3 out of 5.

Dessert was as simple as desserts can be - vanilla ice cream with a homemade butterscotch sauce. Okay, the butterscotch could have been store-bought but what fun would that have been? The Cereal Killer Barleywine Ale, paired with the ice cream, was from Arcadia Brewing Company and completely hit the spot. I have had it before and it certainly worth a re-do.