I was on the lek in the dark. Scorpio was to the south. The Milky Way was awesome and the morning was quiet. I was the only person there. In the dark, coyotes howled (not to be confused with Wiley E. Coyote; he was still at Sanford’s). A Horned Lark here. A Western Meadowlark there (it was my 1, 763, 923 meadowlark, by the way. I was counting...not really…).
What an awesome way to start the day!
A short distance away, upwards of 10 males Greater Sage-Grouse were starting to do their thing. The dance, if you will, starts with the huge chest inflated while the wrists of the wings rub against them. The white collar starts to shake and then “pow!”, two yellow air sacs bust out of the white collar (I'll let you use your imagination here or you can look it up on YouTube...). When the yellow sacs pop, there is the funniest damn bubbling sound you will ever hear. Oh no, not a roar or a growl or something intimidating. Bubbling. Cool.
At one point, in just a few seconds, all the males, closed up the white collar, leaned over on their bellies and put their head on the ground. The females did, too. Huh? Over the hood my car drifting 10 feet off the ground? A Northern Harrier. Once the raptor passed, one by one, they all went back to bubbling and popping. 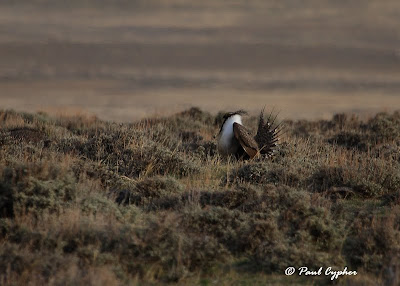 Class, this is your homework – go see Sage Grouse on the lek. Do it. It is, by far, the coolest North American breeding bird event you will ever see. Period. Forget warbler song. Forget neat nests. Sage Grouse on the lek is awesome. Your report will be due on my desk the following day, no later than 8am. If it not there, you will have detention. Forever.

After some time passed (I have no idea how long – maybe an hour?), the show died off and off I went. After a quick bite at IHOP, I shot back to the east. A Rough-legged Hawk was unexpected (...at the time, but not in hindsight). 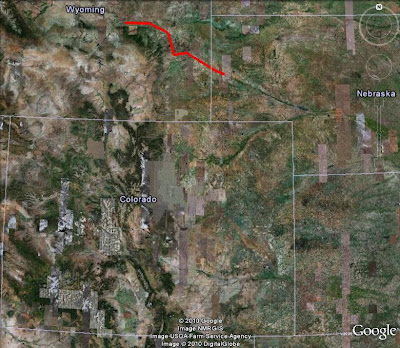 A quick stop at Ayres Natural Bridge was neat. As the name suggests, a small river undercut the rock and created a bridge. Not huge, mind you, but certainly neat. The bridge is located in a little canyon just a few miles off the expressway. Chock full of trees, a rare commodity in the region, this little spot can be quite impressive when passerine migration is really underway. The Belted Kingfisher was cool and ultimately, my final new Wyoming bird.

I was making my way to Fort Laramie, Wyoming, a needed National Park Site on my list, when I knew I had to make two stops. Just West of Fort Laramie, carved in the soft sandstone, one can find grooves. Not glacial grooves. Wagon wheel grooves. So many people had crossed these rocks during the Oregon Trail era that grooves can still be seen to this day. A five minute drive up the way, carved into the same soft stone now called Register Rock, one can read the names, and in some cases, dates, of these western travelers. Who were they?

How many of them made it? In the pic on the left, you can clearly see "JS Bond 1853". Pretty cool, huh? Unfortunately, there are "John Loves Jill 1980" and other drool scrawled into it. Oh sure, in the year 2184 someone might think that is cool, but for now, to me, it is a distraction. All in all, pretty incredible stuff. Also incredible was the Prairie Falcon that launched itself off the cliff. It turned out to be my only one for the trip. You never know what may turn up at these little stops...

By the time, I reached Fort Laramie, the winds were exceeding one million miles per hour. Dust, leaves, small children, and automobiles were all being strewn across the landscape. (I heard one report later that day that a woman's stroller got away from her and they recovered the stroller and child in eastern Nebraska. I can't confirm that report.) Needless to say, strolling around the grounds of this pivotal western fort was a bit tough. But, so worth it.

In a nutshell, sometime around 1815 or 1816, a Jacques La Ramee was trapping the area with some others. He disappeared. Arapahoe Indians were accused of knockin’ him off so the trading camp was named in his honor. By the 1830s, the camp had become an honest fort and before long it was a major economic hub in the West. The Mormon Trail? The Oregon Trail? The very short-lived Pony Express? They all passed through here. After gold was discovered in the Black Hills, the region became embroiled in what is now the Sioux War of 1876-77. Guess what was a major base of operations? Yeah, Fort Laramie. The completion of the Transcontinental Railroad pretty much sunk the place. By 1890, the place was abandoned. (The picture on the left is taken from inside the old admin building across the parade ground to the barracks. Notice the flag.)

A true highlight was when the interpreter there (those people know everything!) allowed me into one of the rooms at the Sutler's Cabin.

What is the Sutler's Cabin? The buying, selling and trading of goods occurred here. Coffee. A saddle. Whiskey. Anything you needed could be found here. It is kinda like Wal-Mart but without the labor issues. Everybody was in that building at some point. Today, you view the room through a plexiglass door. She keyed me in. The counter, shaped like a giant “L”, was partly reconstructed. I stood at, and touched, the original counter. (In the picture, you can clearly see which side of the counter is the original.) Mind you, this building was built around 1849 (it is considered one of the olden buildings in Wyoming). Jim Bridger, the mountain man? George Custer? Crazy Horse? Richard B. Garnett, the commander of Laramie in 1853 (who went on to be blown to pieces at Pickett’s Charge 10 years later)? They all touched it. So did I. The only thing I needed to complete the feel of the moment was some money and someone to barter with.

After taking pics and enjoying the place for quite a while, I moved along. I pulled over for gas in a small town. Despite preventive measures taken by the owner, the door of the station could get the best of you in a stiff wind. I was at the counter paying for my banana when a charming old lady (I mean OLD) entered the building. At least, she tried to enter. As she pulled the door open and began to enter, the door got away from her and pinned in the door frame just like a mouse gets caught by the wire in a trap. In a heartbeat, I was at the door and got it open. “Are you okay?”, I asked. “Yes, I am. Thank you very much.”, she said as she continued on her way. “You know, you remind me of Jim Bridger. He was quite a nice man, too....” She was THAT old.

Moving east still, I wanted to continue to check out some historic sites. For the birder, the Nebraska panhandle is home to some pretty cool western birds, including Prairie Falcon and White-throated Swifts. With luck, Long-billed Curlew, Mountain Plover, Pinyon Jay, and Lewis's Woodpecker are possible, too.

In a short time, I was at Scotts Bluff National Monument, Nebraska. Rising hundreds of feet off the otherwise flat landscape, this landmark was key during the Oregon Trail days. After securing lodging and a quick dinner, I shot off for an evening of birding and photography. The winds made any landscape photography with a tripod impossible. The 400mm lens I use for wildlife photography might as well be a sail when used in the open, so it was basically site-seeing and birding.

A quick trip to Wildcat Hills State Recreation Area was barely worth it. The only bird that thought they winds were tolerable where the Mountain Bluebird. Their colors, by the way, are never less than stunning. (Keep in mind, there is not much green in mid-April outside of the pines).

I also managed shots of the bluff from the shelter of my car. I think, ultimately, the winds worked in my favor. All that dust turned the sunset into something spectacular. The bluffs were gorgeous... 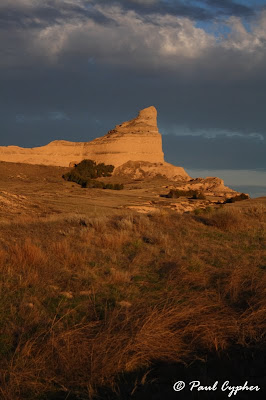 You totally played the "I'm an interpreter too" card to get the behind the scenes tour! Sneaky.

I did not play any such card! I swear. While I can be sneaky, I did no such thing here...

Sounds a little fishy to me. You didn't casually say something like, "Well, last week with my colleagues from NAI..." or anything?