Three In The Freezer

Three for me in the freezer! Three what? Three pheasant - some of the best eatin' game birds I have ever had!

Saturday morning was a chance for me to do hunting with my buddy Kevin. Every year, his church gets the guys together for a pheasant hunt. He has been gracious enough to invite me even though he knows I am a much better shot..................

So after breakfast at Bob Evans in Dundee, the seven of us shot (um...sorry) over to the Sexy Pheasant. For a very reasonable price, they will release the birds (Ring-necked Pheasant and Chukar) on the hunting tract and then clean them for you when you are done.

Now wait a minute. I know what you are thinking (I have ESPN). You must be thinking how unfair it all is. You pay to have them released and them shoot them? Yes. But first, there are few pheasant left. Numbers are certainly way down in the past few decades. Walking two miles of fields would be pointless if nothing were there. Second, just because they were just released does not mean they are stupid. With zero snow cover and plenty of beans to hide in, those birds were invisible. We missed 'em and the the dogs were missing 'em, too At one point, I almost stepped on one! Third, you have to be ready when they take off and shoot straight. It was not, um, like shooting fish in barrel. No way. Keep in mind, too, that both birds are not even native to North America. Why were they brought here? Yup, you guessed it. Hunting.
One of the highlights of the day is watching the dogs. Really! Claire and Gabe were working pretty hard.

Zigging. Zagging. Stopping. Turning around only to take off again. You could tell they were fired up and ready to go the minute they go out of the truck. Claire (pictured at left) was certainly showing some signs of her age beyond the gray in her face. By the end of the hunt, she was so pooped. But she didn't let that stop her! Gabe? Well, I'm no huntin' dog pro, but he was a bit "wet behind the ears." At times, he got a little ahead of us, but so what right? Any way you look at it, I tip my hat to Dave for taking all the time to train 'em!

Unfortunately, more of the bird action was on the opposite side of the line (Kevin anchored the extreme left and I was next to him). Plus, I am sad to say, I was not shooting well. I can only account for two birds. In both cases, using military fighter pilot parlance, they were "partial kills". Kevin got the "other parts", plus some of his own.

Ultimatley, in the true sense of hunting and sharing, who really got what is not the issue. The birds are totaled at the end of the hunt. 24 birds among 7 hunters is basically 3 each. I'm looking forward to just breasting 'em out, flouring the daylights out of 'em and browning 'em up in butter. 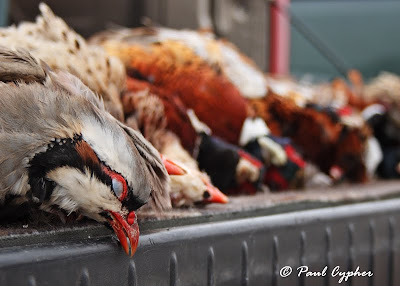 Email ThisBlogThis!Share to TwitterShare to FacebookShare to Pinterest
Labels: Broadheads and BBs (hunting)