So with today being my last day off until well into next week, I opted to spend the bulk of the day at Lake Erie Metropark for the Detroit River Hawkwatch.   We saw a few birds... 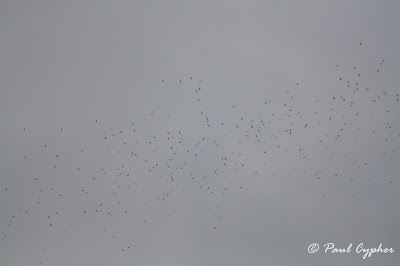 Oh, that was just a few of the 10,000 or so Broad-winged Hawks that were recorded.  What a great day to be there!  Some birds were quite distant, but a good many of them were within reach of my lens (400mm).  While that number may seem high, believe it or not, there are tens of thousands more on the way in the next week or so. It should be awesome!


Other goodies for the day included Turkey Vulture, Osprey, Bald Eagle, Northern Harrier, Sharp-shinned Hawk, Cooper's Hawk, Red-tailed Hawk, American Kestrel, Merlin, and Peregrine Falcon (which I missed). The official numbers should be posted soon. You can read check them out here.

Now and then, other birds trucked on past, as well.  The Northern Harrier was particularly cooperative, too.  I managed to snap the shutter just as the bird (a juvenile) was looking up over it's shoulder.  Can you that line that delineates the face?  That marks the border of the facial disk.  Basically, this bird can hunt like an owl - coursing low over the fields and marshes listening for food just as much as it looks for food.  Unfortunately, that habit of hunting low misleads some people into thinking they won't migrate at high altitudes.  Oh wow, can they!  Today, we had a few that were easily in the stratosphere! Okay, not that high, but they were waaaaaay up there!
The next few days should be quite good.  Get out there and enjoy it while you can!
Posted by Paul at 9:16 PM