Two Key Birds And Some History

Up before the sun (are you seeing a pattern here?). After a quick breakfast at the Hill Top Café, I sped off the Kerr Wildlife Management Area. I had discovered a source online before I left on my trip. The fellow claimed that this location was great for both the Golden-cheeked Warbler and the Black-capped Vireo. In fact, he claimed it was the best place for the Vireo in all of Kerr County (the heart of the Hill Country). The overcast skies kept the temps cools. At Bobcat Pasture, just like the guy said, I found the singing BLACK-CAPPED VIREO (life bird #603) in a matter of minutes. I had a few more within an hour. 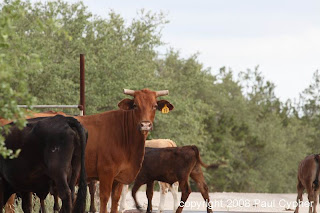 The cattledrive was unexpected. While hiking a short distance from my car, I noticed the sound of cattle and cattle drivers getting closer. Before I knew it, dozens of cattle were between me and my truck. The facial expression of bull # 15 said it all “Who the hell are you?” I’m from suburban Detroit, not a farm. What are you supposed to do when a monster cow is between you and your car? After debating it for a few minutes, I simply walked up to my car and climbed in. Huh, that was simple.

I also did the wildlife drive through the property. I would periodically stop and get out at various locations. At one stop, a “chip” note caught my attention. Seconds later, a warbler with a black throat and white belly flew feet over my head. Before I could get on it, it flew back across the road. I found it on the edge of the tree. GOLDEN-CHEEKED WARLBER! (#604). It’s golden cheek was simply glowing in the now shining sun. Very cool. Unfortunately, the look was brief, but still worth it.

Lunch time was at the Fredericksburg Brewing Company. 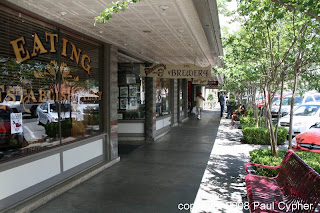 Enchanted Rock Red Ale, Not So Dumb Blonde Ale, Peace Pipe Pale Ale, Pioneer Porter and the Whitetail Wheat Ale were on tap. The Blond Ale and Pale Ale were just too hoppy for my tastes. The others were very good and burger was top-notch.

As a part-time history guy, I had to take a moment and walk though the house where Chester Nimitz was born in 1885. He went on to lead the United States Navy during World War II. His birthplace is now an upscale art store.

I continued the history theme and went on to the Lyndon B. Johnson National Historical Park. A tour of his ranch is available and very worth it if you are into that sort of thing. For the record, Lady Bird still does not have a stone on her grave even though she died a year ago. She is buried next to him on a small plot across from the ranch house. It is really too bad the bulk of his legacy will be the Vietnam War. It clearly overshadows a lot of cool things that he did during his administration.

TC had me on back roads for a while before I got to the main expressways north of San Antonio. Oh, what fun driving! What I would have done to have a little sports car for that section of road. I found “Red Barchetta” by Rush to be very appropriate driving music. Fortunately, I was not being chased by the “gleaming alloy air car, two lanes wide.”

A brief stop at the Gaudalupe River State Park was a bust. It was said that Green Kingfisher can be found there. Well, great, but not with 100s of sweaty people in the river.

Dinner was supposed to be at the Faust Hotel in New Braunfels. It is the home of the Faust Brewing Company. I should have read the webpage more closely. At no point does it say “Come enjoy our food and beer.” I, however, have been to various brewing companies and they often have GREAT food, so I assumed I could eat there because it did not say “no food.” Well, guess what? No food. Not even pretzels. I drive 30 miles out of my way and they don’t even have a God-damned pretzel? Oh, and they only brew one beer. It happens to be Walter’s Brown Ale and it happens to be one of the best brown ales I have ever had. The nutty finish was really something else. Serve food, brew more beers like Walter’s, and they can really do well, I’m sure.

I headed to San Antonio to spend some time with my sister, Rebecca.